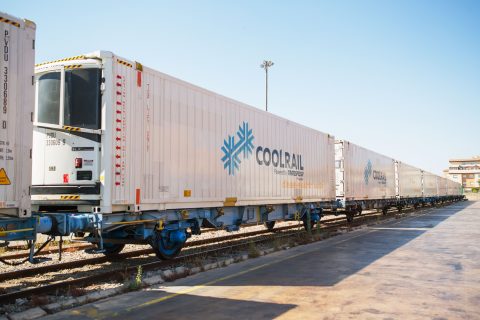 The first CoolRail train full of fresh fruits and vegetables arrived in Denmark through a direct train route starting from Valencia in Spain. With an intermediate stop at Cologne, Germany, the dedicated fresh goods train covered a trip of five days- a pretty competitive transit time. Tests for this service have already taken place before the official shipment, and the current objective is to establish it on a regular weekly basis.

CoolRail was planning to expand its services to Nordic countries since 2020. Customers’ growing demand in the region for sustainable transport solutions urged the implementation of plans. Specifically, the shipment was organised for Coop Trading, the largest retail cooperatives’ supply company in Denmark, Finland, Norway and Sweden.

In practice, the new service will save approximately 70 per cent more CO2 emissions than road transport solutions. On top of that, it is also economically viable. On its return trips, it will transport empty pallets belonging to the Euro Pool System (EPS), the company that, together with Transfesa Logistics, is responsible for the CoolRail project.

According to Pedro Ramos, Key Account Manager at Tranfesa Logistics, the company has made great efforts and progress in solidifying CoolRail “as the most sustainable and efficient distribution network for the shipment of fresh produce throughout Europe”. Since May 2019, when the first produce train travelled from Valencia to the Port of Rotterdam, CoolRail substantially pursued its initial goal. In October 2020, CoolRail announced the expansion of its network. Transportation of fresh goods would be possible in new destinations such as Germany, the Nordic countries and the United Kingdom.

About five months later, we see expansion plans becoming a reality, linking central European destinations and promising more growth. Especially for the Nordic countries, which pay considerable attention to raising environmental awareness, CoolRail seals the most sustainable solution in the transportation of fresh produce, with the less possible emissions.