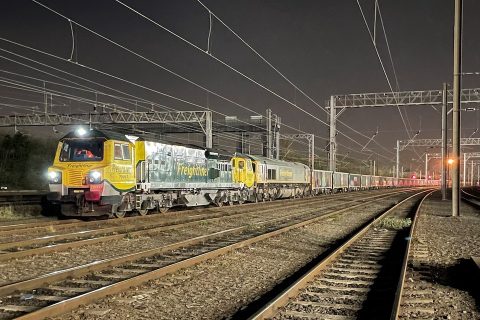 The UK operator Freightliner, part of the American-owned Genesee & Wyoming corporation, has successfully completed a trial running of another ‘Jumbo’ aggregates service between the Peak District and London for customers Tarmac. At nearly 4000 tonnes, the train is the heaviest ever on the working and the route.

Freightliner has been taking advantage of the present situation on the UK network and makes the most of available paths and motive power capabilities to move bulk loads for their long-standing customers, Tarmac. The currently reduced demand for passenger travel has provided an opportunity to timetable a 39-wagon “jumbo” train on the rail network, transporting stone and construction materials to support critical infrastructure projects, and the booming construction market in the south east of England.

The train departed from the quarry at Tunstead Quarry, near the town of Buxton in the Peak District, on Tuesday 16 March. A single class 70 locomotive hauled the 39 wagons to Wembley Yard in North London, where the train was split into two portions, with two separate trains going onwards to terminals at Battersea in south London and to Paddington in the west of the city. After unloading the construction materials at the two terminals, the wagons were re-attached at Wembley Yard and returned to Tunstead as one train. The class 70, a 2,750kW (3,690 bhp) unit, has proved well capable of such heavy loads. For surety, a class 66 locomotive accompanied for contingency and not under power.

At 3,840 tonnes, this is the heaviest aggregates train ever to have operated on this route.  Usually, the trains transporting aggregates and construction materials from the Peak District would carry up to 2,400 tonnes. According to Freightliner, the additional volume on this jumbo service represents the equivalent of over 110 HGV journeys and a saving of around 89 tonnes CO2e compared to road.

The viability of running jumbo services

Working in collaboration with Tarmac and Network Rail, Freightliner is now looking to carry out further trials of the jumbo train concept across this route.  Freightliner also continues to work closely with Network Rail to identify opportunities to reschedule services to make better use of network capacity by running longer trains that transport more freight or by speeding up journey times, thereby making services more efficient and productive and, in doing so, unlocking greater benefits for rail freight customers and the UK economy.

Tim Shakerley, the managing director of UK Rail Services at Freightliner, said they have worked closely with Tarmac and Network Rail to demonstrate the viability of running jumbo services from the Peak District. “Transporting more freight on each train boosts both improvements to the productivity and efficiency of services and drives further environmental benefits by reducing the carbon emissions of each tonne of freight moved”, he said. “We welcome the cross-industry support to trial these initiatives while demand for passenger travel is reduced and look forward to working in partnership with all stakeholders to secure these efficiency gains into the future.”

The customers have been well pleased as well. “We’re delighted to see the successful trial of our first ‘jumbo’ train transporting essential construction materials from Derbyshire to London as part of our ongoing commitment to supporting the delivery of a low-carbon built environment”, said Chris Swan, head of rail at Tarmac. “Effective use of the rail network is key in supporting the transition to a net zero society, and collaborative approaches are vital in helping the industry drive forward more innovation and sustainable solutions.”

Charlene Wallace, Network Rail’s director for freight, national passenger & customer experience, is convinced that working in partnership will be vital in helping maintain this level of success. “Whilst passenger numbers are significantly reduced, we’ve been able to advance the benefits to be had with freight far quicker than ever before”, she said. “I’d like to keep that open conversation with our cross-industry partners going for a more efficient and productive service for our freight customers now and in the future.”

Wallace’s colleague, David Hunter, the senior route freight manager for Network Rail, said the pandemic has helped rethink the case for rail freight. “We’re taking advantage of the space available in the timetable”, he said. “It’s the first time we’ve seen a train of this weight and length take this route. By transporting more and further afield, we’re showing how the rail industry is building back better – adapting more efficiently to the needs of our economy and environment.”

The technological challenges of putting ever larger, longer and heavier trains on the network will be part of the discussion at RailTech Europe, the industry’s forum at the end of the month (30 March – 1 April). Being held online for the first time in it’s fifteen year history, registration and attendance is free to all participants. Sign up here for the conference and networking opportunities.