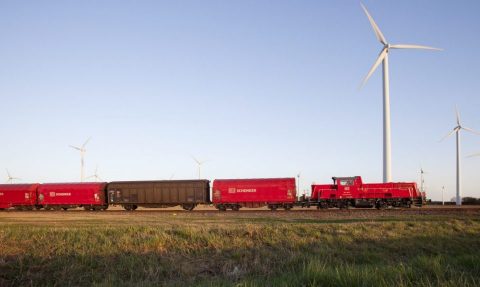 DB Cargo Eurasia has launched a new multimodal route from Xi’an to Helsinki via the port of Kaliningrad. It is the first route to Finland including a sea leg; until now the two countries were connected via the land route passing through Russia. By including a sea leg across the Baltic Sea, busy border crossings can be avoided and transit time can be reduced.

The total transit time from Xi’an to Helsinki is approximately 16 days, sayd DB Cargo Eurasia. The route Xi’an-Kaliningrad is carried out by train. “The first container train arrived in Kaliningrad on 8 March. Subsequently, 42x 40-foot containers were reloaded from the wagon onto Mannlines Multimodal’s vessel Dornbusch, which departed on 10 March for the destination port of Helsinki. Here, the cargo arrived on 13 March 2021. The train carried containers containing clothing, furniture, fittings, medical masks and medical consumables, car tyres, production equipment and household appliances.

The route is not yet a regular service, but can be offered to customers at any time, the operator says. What is unique about the service is that it does not make a stopover in Rostock, as many multimodal services, but it routes directly from the Russian port to the Finish capital, which are situated at a distance of 405 nautical miles from each other.

Finland has been gaining significance on the New Silk Road. So far, trains have arrived in Kouvola, a logistics hub close to the border with Russia and also Helsinki, using the Trans-Siberian route via Russia. As such, Kouvola is linked with Xi’an and Helsinki with Xi’an, Jinan and Suzhou. The country is an interesting export country too; wood logs from Finland or other Scandinavian countries are a popular item in Asian countries.

DB Cargo has been keen on tapping into the Scandinavian potential. In February, it launched a new route from Xi’an to the port of Fredericia in Denmark. This train departed on 28 February and was also routed via Kaliningrad, where it arrived on 12 March. From there, the containers were transported further by ship on 15 March and reached the port of Fredericia on 18 March 2021, after a short stopover. Further transports on this route are planned on a monthly basis.

Earlier this year, the operator launched its new connection Xi’an-Oslo, also via Kaliningrad. The first block train arrived at the Norwegian port on 26 December, following a trip estimated to last between 15 and 17 days.

DB Cargo Eurasia is carrying out the Scandinavian transports together with its partners DB Schenker, DB Cargo Russia, XIAN ITL, UTLC and Mannlines. Since April 2020, DB Cargo Eurasia has been working with the above-mentioned partners and the port of Rostock to transport urgently needed masks from China to Germany via the Kaliningrad-Rostock route, among other things, thus decisively counteracting acute supply bottlenecks.

“The Kaliningrad-Rostock route is an attractive alternative for customers to the otherwise continuous rail transport between China and Europe via the Belarusian-Polish border Brest-Malaszewicze, where there are always capacity bottlenecks for seasonal reasons”, said DB Cargo Eurasia.

Indeed, Kaliningrad is currently the most preferred alternative to the traditional route between Europe and Asia. From Xi’an alone there are currently more than 90 trains departing to the Russian port. From the Russian enclave vessels also take off to various Baltic sea ports, to be forwarded across western and northern Europe.

DB Cargo Eurasia forms the network of DB Cargo structures from the EU’s eastern external border and fills rail transport within the DB Cargo network with volumes to and from China. It is doing this together with DB Cargo Russia and DB Cargo Transasia, which is currently being set up.

“One advantage for customers is that all services are offered from a single source by DB Cargo Eurasia. The transcontinental connections between China and Europe provide various customers with performance and competitive alternatives to time-consuming shipping and cost-intensive air freight. In addition, the main part of the route is implemented via climate-friendly rail transport.”