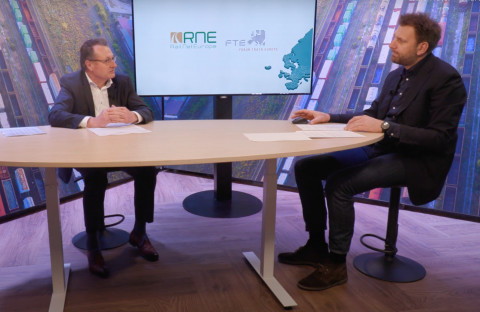 In Europe, about a quarter of railway capacity is lost because train paths are not optimally used. As a result, rail transport lacks the flexibility that characterises road transport. Yet, the roadmap of the European Green Deal requires a modal shift towards rail. Luc Vansteenkiste of Railnet Europe therefore emphasises the importance of a centrally controlled and international approach to capacity management on railways.

The Railnet Europe (RnE) representative was a guest in SpoorProTV, our sister’s broadcast, on 24 February. He talked about the Time Table Redesign project, TTR in short, where people are working hard to streamline timetables and capacity management. In 2021, international train traffic still suffers too much from obstacles, such as unforeseen work or capacity requests for lanes that will ultimately not be canceled if they are not used. In other words, the demand from the carriers and the supply from the rail managers must be more synchronised. According to Vansteenkiste, that is the central component of the TTR.

All stakeholders should come together to determine the total available capacity. They then have to coordinate their needs, so that a better distribution of the available capacity can be achieved. Also with regard to the short versus the long term. As far as Vansteenkiste is concerned, the project is therefore a more sensible investment than investments in new infrastructure.

The TTR should ultimately make it possible to meet the needs of travelers, who want to book far ahead and benefit from stability, as well as those of freight transporters, who must be able to switch quickly.

“Now, to operate a freight train from the port of Rotterdam to Poland, you still have to knock on the door of three authorities, namely the Dutch, the German and the Polish. This must be one application, in which the allocation of the trainpath is arranged from start to finish. This also applies to passenger transport. Just like with airline tickets, travelers must be able to book their trip well in advance.”

To operate a freight train from the port of Rotterdam to Poland, you still have to knock on the door of three authorities

In small steps towards the goal

Eleven European countries have already committed to implementing the required adjustments. The TTR works under the minimum viable product principle, in which new concepts are tested in real life in small steps, in order to work towards full functionality. “We are not aiming for a rollout in the form of a big bang, but rather an oil slick that spreads across the continent,” says Vansteenkiste.

This is a necessity rather than a choice, because according to Vansteenkiste, many obstacles are still encountered in the TTR. “Despite the many efforts, we notice that there are still minor national differences in procedures, regulations and approach. We have to be able to deal with that. And in projects involving international coordination, planning and monitoring finances always remain points of attention”, says Vansteenkiste.

Nevertheless, he expects the TTR to be completed by the target date of 2025, at least in the eleven countries leading the way. Elsewhere, it will have to become clear how things are going at the end of this year. In any case, it will not be due to the willingness of the parties involved, says Vansteenkiste. “Everyone works hard and there is almost permanent consultation. There is enthusiasm and the will to give rail traffic a place.”