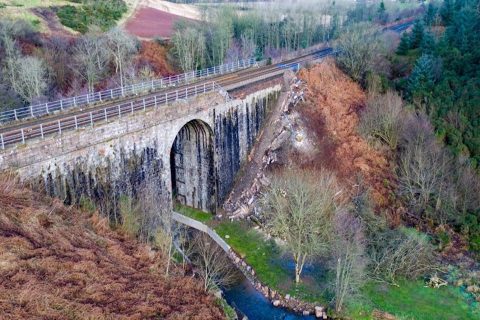 Aberdeen main line back on track after bridge repairs

Southbound rail connections have been reestablished from Aberdeen, in the north-east of Scotland. The line reopened on Monday 22 February following extensive repairs to a damaged viaduct. The line has been out of action since 15 January when a bridge, built in the 1840s, suffered a partial collapse. The location of the incident was very close to the site of the fatal derailment in August last year, caused by multiple landslips.

The main line south from Aberdeen, the UK’s self-styled oil capital, has been closed for over a month, due to the collapse of a historic bridge structure. The closure – between Stonehaven and Montrose – has resulted in all passenger services being cancelled, and very long detours for freight operations. The reopening follows extensive repair works to the damaged bridge, and inspection of similar structures on the line.

Main line closed for a month

The rail bridge, which dates from the 1840s and is located three miles north of the village of Carmont, has been closed since 15 January. Severe weather is thought to have contributed to the damage. According to Network Rail, the UK infrastructure agency, masonry fell from the parapet of the bridge, rendering it unsafe.

Network Rail engineers, and specialist contractors, have been working around-the-clock since the incident to carry out full structural assessments of the bridge, complete parapet repairs and strengthen the structure. The works included additional concrete supports, reconstruction and strengthening of the overall structure.

Freight flows affected mainly originate from Aberdeen’s Waterloo terminal, in the city’s docks. Diversionary routes have required several hundred miles of detours via Inverness. Kris Kinnear, Network Rail’s capital delivery director for Scotland’s Railway, said there were significant challenges in completing the repairs. “Our engineers have been working hard to complete these repairs and reopen the railway as quickly as possible”, he said. “The rural location and height of the structure, coupled with the extreme weather conditions, made this a very challenging project for our team.”

In a further official statement from Network Rail, the infrastructure operator said the bridge was last inspected in October 2020 and also received a detailed examination in March 2018. “No significant deterioration in its structural condition was found during these inspections and investigations to establish the cause of the parapet’s failure are ongoing”, they said.

As a response to this incident, additional inspections have also been carried out as a precaution on other similar bridges between Aberdeen and Montrose, and elsewhere on Scotland’s Railway. Extensive trackside and aerial surveys of the railway between Stonehaven and Montrose have also been carried out in advance of reopening, with final line checks completed yesterday morning (Sunday).

The scene is not far from the fatal derailment last year, which saw a passenger service come off the tracks as a result of multiple landslides.