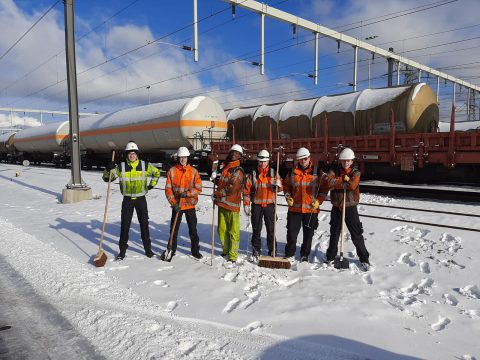 ‘If we can’t drive, we help to get trains move again’

Train drivers in the Netherlands that were exempted from their job due to heavy snowfall decided to pick up the arms, and help battle the snow. On Tuesday and Wednesday, staff of several railway undertakings join ProRail and its contractors in cleaning up the tracks of the port of Rotterdam.

It is a humble effort: all that needs to be done is sweeping the snow off the switches, it can be done by hand, explains Henny Kennedy, coordinator of the ProRail Incident Team. We meet him at Europoort, where his team is working on the fourth emplacement on the list of Tuesday. “We have already completed Maasvlakte West West, Botlek and Pernis.”

These emplacements all form part of the Port of Rotterdam, a 40-kilometer deep funnel, containing a series of railway yards (parking spaces for wagons and tank wagons). In several places, ten or more tracks lie next to each other, with many switches that are now snowed up. Kijfhoek alone has 43 dividing tracks, fourteen arrival tracks and twelve siding tracks. And then there are yards at Waalhaven, Maasvlakte, Botlek, Pernis and Europoort, describes ProRail.

Although the job is simple, it is laborous and time-consuming. And time is exactly what the rail freight industry does not have: many trains are waiting to depart, often carrying crucial cargo such as ore and coal for factories and hospitals. That is why we right away committed to the job, when we were asked to join the team, says Pieter Hazejager, country manager at Captrain.

Arriving on the spot, the job seems to be not limited to the cleaning of switches. “This was a little bit of a surprise to us, but we were asked to clean the fire safety channels. So this is what we are doing”, Hazejager describes. Indeed, the main focus of the ProRail Incident team is these specific ‘wells’, explains Kennedy.

Thanks to the efforts of our drivers and wagon masters, our locomotives can start working immediately when the port tracks come back into service

“Because carriers also transport dangerous goods, strict safety requirements apply to the yards in the ports” explains ProRail. “This means that we cannot start driving until the fire extinguishing systems on the site have been cleared of snow. That is also a huge task.”

If we can’t drive, then we help where we can

Equally important are the capillaries of the rail system in the port. These are the so-called “trunk lines” that lead to the companies and freight terminals. Without these lines, the train drivers cannot get their train to the goods to be transported. However, these lines are often property of the terminals, and therefore another approach is needed.

Kennedy gets a phone call. “A railway company is asking if they can enter these terminal tracks and clean the tracks themselves”, he explains. It shows the eagerness of these companies to just start operating their trains. According to many of them, the whole operation is moving way too slow. “Two days of standstill easily leads to damages running into the tonnes of euros”, said Joanda Plomp, CEO of LTE, one of the carriers employing staff to clean the tracks.

“For us, the clearing of the EMO is the most crucial element of the operation”, says Hazejager, but according to him, this has not happened. The EMO’s dry bulk terminal in Rotterdam is the largest iron ore and coal terminal in Europe. EMO stores and transfers these bulk products for various customers in the European energy and steel industry. “It is of crucial importance that these trains start running again”, says Hazejager. “These trains supply energy to factories and hospitals in Germany.”

But according to Kennedy, there is no specific priority in the sites to be cleared. “We have asked the participating carriers which sites they find most important, but the conclusion was that all sites are important. We have decided to start with the place where most trains depart (Maasvlakte). Tomorrow we are finishing this area and Kijfhoek. Then, we should be able to see more freight train traffic.”