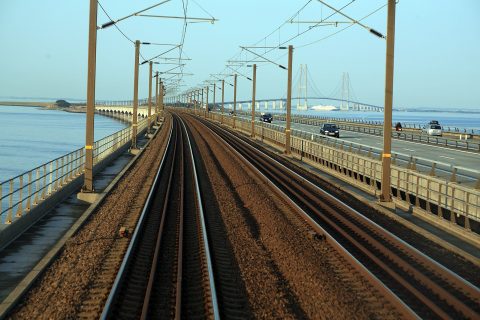 Once again, pocket wagons with semi-trailers are banned from the Danish Great Belt Bridge, due to what was perceived as a potentially threatening situation. The measure taken by the Danish authorities is understandable, in light of the fatal accident on the same bridge on 2 January 2019. However, it hits the intermodal industry hard. Was the situation really a threat? And why did a trailer shift from its place on exactly that same bridge?

The company involved in the incident, DB Cargo Scandinavia, says that claims reporting a ‘near accident’ are far from reality. Responding to queries of RailFreight.com, it commented that considering the seriousness of the situation, especially after the fatal accident on the bridge two years ago, talking about ‘near-accidents’ could prove disorienting. The company claims that the freight train in dispute underwent all the protocol controls before the trip. It had all the needed approvals, and nothing indicates that there was some kind of omission that led to the incident. Consequently, it considers the situation quite bizarre and complex.

Simultaneously, the Danish authorities reached other conclusions. According to the Danish Transport, Construction and Housing Authority, it has so far been proven that a semi-trailer was outside the profile of the freight train. “During a subsequent inspection after the immediate stop, it was found that the semi-trailer kingpin was not locked on to the saddle of the pocket wagon. The semi-trailer had shifted position, and it protruded beyond the side of the freight wagon”.

The EU Agency for Railways (ERA), which formed a task force to secure safety on the bridge after the accident two years ago, informed RailFreight.com that this Task Force will meet once again on 4 February to examine their possible reassessment following the incident. The matter is thus, at the very least, taken serious.

To assess the issue better, DB Cargo Scandinavia got access to the CCTV footage from the bridge’s cameras during the incident. Based on the footage, it appears that the train’s front part got slightly lifted due to strong winds. As a result, a train socket got partly off from one of the pocket wagons.

On top of that, the train did not seem to exceed any speed limits while passing the bridge. All circumstances and conditions seem, thus, correct. Yet, a safety issue occurred again in a susceptible area. Are pocket wagons that unsafe after all? Do safety measures meet the needed standards or should they readjust, and if so towards which direction?

“According to our records, there have only been two accidents with pocket wagons during the last 13 years. Statistics show that transporting goods by rail is 19 times safer than transporting those same goods by road. When broken down by individual country, the transport mode is safer than the road in a range from twice as safe, up to 70 times safer”, ERA stated two years ago.

In Denmark, the figure is 18 times safer. This type of rail transport has an exemplary safety record. The accident on 2 January 2019 was the first-ever reported accident in the country that involved a pocket wagon. Even the Danish Accident Investigation Board has stated that there are no reports in the rest of Europe concerning pocket wagon transportation. Denmark seems to constitute one of the very few sources of such complains primarily related to the Great Belt Bridge.

Weather conditions played a role in the accident two years ago. That is why it was required that BaneDanmark and the railway companies ensure that all freight transport on the Great Belt Bridge takes place under stricter conditions concerning freight trains’ speed with heavy wind conditions.

Is this sufficient, though? Reports state that strong, accelerating winds on the north side of the bridge are very common. One would expect that good operation management would be of priority to ensure the safety of trips. However, the investigation presents some ambiguous findings. For instance, despite the particular conditions that apply to the area, there are only two wind measurement instruments on the 18 kilometre-long bridge.

Despite the common acceptance that the bridge’s north side presents stronger weather phenomena, both measurement instruments lie on its south side. Simultaneously, the bridge does not have windshields that would slow down winds and secure trains’ operation.

Understandably, findings from the Investigation Board are critical for assessing the situation and avoiding early conclusions. Nevertheless, if the Task Force implements changes on the security measures, wheather conditions should be among the main focal points.

The ban on semi-trailers for a short period until the investigation’s conclusion makes sense. From that point on, if there was a safety omission from the rail company’s side, that could cause more accidents in the future, rules should get readjusted while considering very well all the possible factors that led to the security incident. That being said, authorities should thoroughly examine a long-term ban on semitrailers because the impact it can have on combined and intermodal transport can prove detrimental.