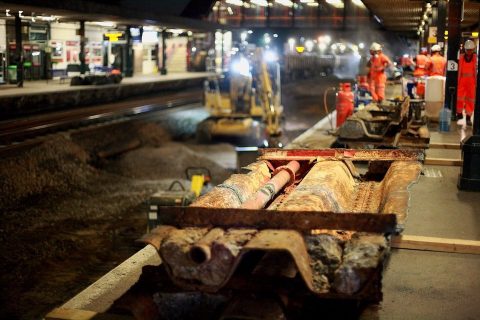 An ambitious plan has been put forward to redevelop the station in the centre of Oxford. The city, home to the world famous university as well as significant industrial interests, including the BMW Mini factory, is at the crossroads of radial routes from London and the Midlands, and at the end of the East West Rail route, currently beginning construction and linking it directly with Cambridge.

The local administration, Oxford City Council, has backed plans for a 160 million pound (176 million euros) expansion and redevelopment of the city’s main railway station, including the provision of new freight avoiding lines. The proposals, which have already been put forward to the UK government by Network Rail, the infrastructure agency for the UK, intend to address the need to increase capacity at the station for more passenger and freight services.

Studies predict that the passenger traffic through Oxford will increase rapidly, despite the pandemic. The consortium of local administrations – the Oxfordshire Growth Board – has said that passenger usage will increase by seventy percent in just the next seven years. With rail freight growth also expected, the station is a bottleneck to future rail network expansion. The proposals are to upgrade the capacity and the facilities at the station.

The six administrations are convinced that rail will be necessary to realise economic growth in the area. Their recommendations also include the re-establishment of passenger services on the Cowley branch line, in the south east of the city. The line currently exists as a freight resource for the BMW Mini car manufacturing plant that shares the suburb’s name.

If the Cowley branch were upgraded to carry passengers, the layout would demand the proposed extra capacity through Oxford station for freight services. Presently traffic is constrained through the station. The Cowley proposal is similar to schemes around Blyth in the North East and Fawley in the South West of England. it has been suggested that the branch could use repurposed London Underground stock, being developed by Viva Rail.

The proposals come on the back of a plan, called the Oxfordshire Rail Corridor Study, which was released in 2020. Having already seen significant growth, the regional rail network is at capacity, says the report. With the much-anticipated ‘East West Rail’ project under construction, and expected to generate significant extra demand, the system is set for overload.

The report, and the proposals, have bene submitted to both the UK government chancellor Rishi Sunak and transport secretary Grant Shapps. The Oxfordshire Growth Board said in their submission that the project was an investment opportunity that delivers tangible quick-wins. Making space for additional rail freight will help Oxford maintain its reputation as a walkable city, as well as safeguarding economic growth.