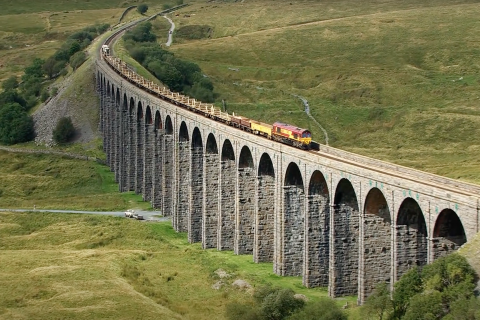 A number of UK freight services are temporarily increasing in length and weight in support of the economic recovery after the pandemic. The longest trains, running at 775m, are in-line with the planned ambition to make the UK network universally compliant with increased maximum capacity standards.

Network Rail, the UK infrastructure manager, has collaborated with operators around the country to make possible a number of augmented freight formations, designed to help the economic recovery of the UK, while at the same time helping achieve reductions in road freight activity and carbon emissions.

Longer freight trains are not new to the UK network. Since the beginning of 2020, Network Rail and rail freight operators have collaborated to allow freight trains to move more goods each time they run, and to operate more efficiently on the network. Trains of up to half a mile long (775m) are helping the rail freight industry deliver more goods for consumers and reduce UK carbon emissions. Those trains are slightly longer than the maximum European standard of 740m, but the UK loading gauge is historically smaller than the adopted dimensions in Continental Europe. That though is a moot point, given the dominance of intermodal traffic and international standard sizes of shipping containers.

Britain may still have a long way to go before all intermodal traffic can be carried on all lines, but increasing overall train length does have significant economic and environmental benefits. There are well publicised carbon savings to be had from encouraging more freight on to the rails, but there are other benefits too. According to Network Rail, there is a growing body of evidence that more efficient freight schedules improve air quality emissions. They say that recent analysis shows that idling trains emit 14-20 per cent more NOx and particulates than non-stop freight services.

Charlene Wallace, who is currently Network Rail director of freight, in addition to her duties as director of national passenger and customer experience, reiterated the part that rail freight has played for the country. “During the pandemic we’ve seen the crucial role that rail freight plays for our economy”, she said. “That is why we’ve listened to what our customers and their end users have asked for and we’re committed to getting more goods onto Britain’s rail network over the next 12 months.”

Initially Network Rail has been able to respond to that additional freight demand, in part because of depressed passenger numbers. The UK rail freight sector has played a vital role during the pandemic in moving critical goods such as food and medicine, and with reduced demand for passenger travel, trains have been rescheduled to make better use of network capacity.

A number of senior figures in the rail freight sector have responded positive to the table of initiatives. At Freightliner, Neil McNicholas, managing director of UK rail services, welcomed the support Network Rail has provided to identify spare capacity. “Transporting more freight on each train and speeding up journey times supports both improvements to the productivity and efficiency of services and drives further environmental benefits, by reducing the carbon emissions of each tonne of freight moved.”

The commercial benefits have not been lost on Roger Neary, head of sales at DB Cargo UK, who have been running bulk carrying ‘jumbo trains’ for some time. “Such services have allowed us to increase capacity for our customers while making our operations more efficient through reduced train driver and terminal resources and increased wagon utilisation.”

Chris Connelly, the recently appointed MD of Direct Rail Services in Carlisle, felt the progress in timetabling vindicated his company’s adoption of advanced bi-mode locomotive technology. “Our Mossend to Daventry trains utilise the state-of-the-art Class 88 locomotive to carry the equivalent of 38 lorry loads of vital goods the 310-mile (496km) distance with zero exhaust emissions, making it the greenest way to transport goods by far. The new timetabling allows these services to run the same route more quickly, with less time spent waiting in sidings. The extra time helps the entire supply chain, meaning goods are on shelves sooner – fantastic for consumers.”

Speaking for the industry overall, Maggie Simpson, director general of the representative Rail Freight Group, said rail freight is already acknowledged for its environmental performance, but there is never room for complacency. “Allowing freight trains to carry more goods and operate more efficiently on the network is an important measure for decarbonisation and for UK productivity. Working together the industry has made significant progress this year, and we look forward to seeing more trains improved in the coming months.”

Network Rail says that they and the freight operators continue to work closely together to identify further priorities for train lengthening, as well as services that would benefit from improved journey time. “These trains will form a package of service improvements, which will be included in the development of the December 2021 timetable”, said a statement from the agency.

Hard won gains, but will holding them be harder

Meanwhile, although Network Rail retains its ‘passengers first’ strapline, it has pledged to help freight take advantage of the capacity released while those travellers stay away from the railway.“In the intervening period Network Rail and the freight operators will continue to identify short-term opportunities to run longer and heavier trains, and speed up schedules, using the additional capacity created as a result of the thinning out of services.”

Operators will lobby hard for this windfall to be retained in the longer term – just like those longer trains.