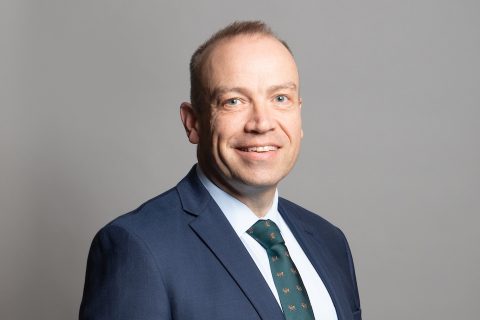 Chris Heaton-Harris, rail minster and a member of the UK parliament, has gone on record to praise the efforts of the rail freight industry during the current pandemic. The government minister was remotely addressing last week’s annual conference of the Rail Freight Group, the representative association for the industry.

At the online meeting, normally held at a London venue, the minister also took the opportunity to restate the government’s commitment to decarbonising the UK economy. He reminded delegates that the UK government has already legislated for a net zero greenhouse gas emissions target by 2050. Some administrations in the UK, notably the devolved government in Scotland, have set even more ambitious targets.

Rail freight has been outstanding

Heaton-Harris reaffirmed the government commitment toward rail freight and outlined the crucial role it will play in decarbonising the future UK economy. In his address, he laid out the government’s vision for the future of freight transport, making it clear that rail would play a key role in cutting carbon emissions across the country and helping the UK meet its 2050 environmental targets.

“I want to offer my heartfelt thanks for your incredible, almost heroic, response to Covid-19”, Heaton-Harris told the conference. “Your efforts during this time have kept critical goods like medicines and food on the move up and down and across the country. Your hard work and dedication during this uniquely challenging time has been outstanding.”

The right honourable member for DIRFT

However, it was in looking to the future that the minister said rail freight had the potential to add significant economic and environmental benefits. “Rail freight has a key role to play in our recovery from the crisis”, he said, noting that the sector had recovered to more than ninety per cent of normal levels, as measured before the pandemic.

The minister does have a track record for advocating rail. He is the elected member of parliament for Daventry, the constituency in the English Midlands that is home to DIRFT, the highly-successful Daventry International Rail Freight Terminal. The minister made that an example for his comments on commitment to modal shift.

Heaton-Harris noted that there are huge opportunities for growth, and said rail freight would be at the forefront of change. He added that it had a crucial role to play in delivering his government’s vision for the future economy of Britain. “We remain committed to the modal shift of freight, as we aim to improve the environmental performance of the entire freight industry”, he said. “We continue to support the need for an expanded network for Strategic Rail Freight Interchanges too, so the industry will be able to reach its full potential.”

The Minister fell short of putting specifics around increasing freight access to the network or increased train paths but did say that his government was committed to the modal shift of freight to rail and it would play a key role in the ambitious Transport Decarbonisation Plan – a report to be published later this year. It is expected that the detailed document, building on the preview published just before the pandemic struck, will steer the future freight strategy. Heaton-Harris also welcomed the Crossmodal Future of UK Freight Strategy, another in-depth report due for publication in 2021.