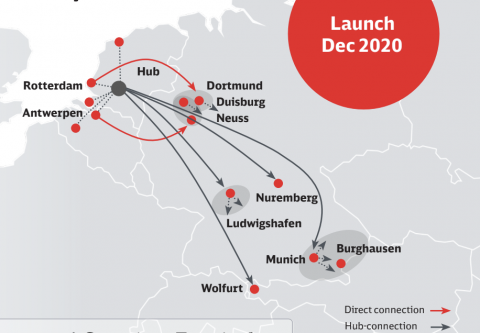 DB Cargo will start in mid-December of this year with a direct rail freight connection between the ports of Rotterdam and Antwerp on the one end, and southern Germany and Austria on the other. It will link to cities such as Ludwigshafen/ Mannheim, Nürnberg, Munich and Wolfurt. From 2021, the volumes on these connections is expected to grow by around one hundred thousand containers per year.

“We are building a system for our customers in Antwerp and Rotterdam that has been successful for many years in other ports, such as Hamburg. With these new connections alone we relieve the pressure on the roads with 70,000 trucks per year”, says DB Cargo director Sigrid Nikutta.

According to DB Cargo, this fulfills a long-cherished wish of the Port of Rotterdam Authority. From mid-December 2020, four trains a day will run five days a week with the destinations: Ludwigshafen/Mannheim, Nürnberg, Munich/Burghausen and Wolfurt.

The operator will assemble the trains at the Kijfhoek yard. This means that more wagons will be handled at the emplacement yard in the Netherlands. According to DB Cargo, this directly contributes to the social return of the investments made here by ProRail and the Ministry of Infrastructure and Water Management in the coming years. These investments were announced on Monday, you can read more about it here.

The trains will go over the Betuwe Route to get to Germany. For the new connections, DB Cargo uses, among other things, flat container wagons that are suitable for all kinds of cargo, as well as freight wagons and tankers.

The ports of Antwerp and Rotterdam handle 27 million containers annually. Yet so far, only eight to eleven per cent of the goods are transported by train to and from the western ports. In Hamburg, no less than fifty per cent of the trips take place by train.