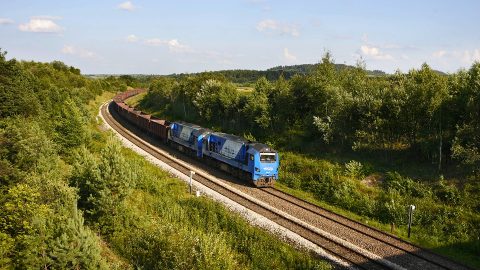 The Polish company PKP LHS is an infrastructure and railway undertaking that operates on its own line. “There are many advantages of working in this way. We do not face the problems that other companies face. We detect, and solve things right away”, explained Aleksandra Adamska, member of the Supervisory Board at the company.

PKP LHS is a unique company in other ways. It operates the westernmost broad gauge railway line, running from Hrubieszów in Ukraine to Sławków in Poland. Last month, it announced an addition to its portfolio. It will revive the Dorohusk – Chełm – Zawadówka line, another broad gauge section connecting Ukraine and Poland. “Yes, I guess you can call us a broad gauge expert”, the Polish lady said.

Aleksandra Adamska was a guest in RailFreight Live on 17 July, which was dedicated to the RailFreight Summit in Poznan. Adamska will be speaking at this summit, to explain the characteristics of the route, which is for freight only, and for PKP LHS customers only.

All for the customer

“We are doing this for our customers. The line ends in the Lower Silesian region. This is an industrial base, with a clear demand for such a service.” Although the route to Chelm is much shorter -30km from the Polish-Ukrainian border- it increases the capacity at the border, making the line available to more customers.

Similarly to the line towards Sławków, the new line is managed by a company with a dual role. A dedicated wholly-owned subsidiary was brought to live, named PKP Linia Chełmska Szerokotorowa (PKP Chełm Broad Gauge Line from Polish), or simply PKP LCHS. The new company is infrastructure manager and railway carrier, just like PKP LHS.

We have gained a lot of experience in both roles and believe that is is beneficial to operate like this. If there is a problem, we detect it right away and solve it right away. If there is a certain request by a customer, for example for a longer or heavier train, we just do it. Therefore, we do not really face big challenges.”

It is those added value services the company now wants to develop more. “No, there will be no more lines. We plan to focus on customs services, terminal services etc. That is the main role for us now”, Adamska said.

In May this year the company announced to invest in the modernisation of the line. The key project is the expansion of the Hrubieszów station at the Ukrainian border in order to increasing safety and operational capacity. Moreover, Meanwhile, it will expand the Local Control Centre at the Sędziszów station. This project will allow PKP LHS to improve computer-based interlocking on two sections of the broad gauge railway: from Sędziszów to Raczyce and Bukowno.

In addition, the company plans to construct a new control centre at the Wola Baranowska station. It will be responsible for interlocking on two sections: from Wola Baranowska to Huta Deręgowska and Grzybów.

The broad gauge line is also called the Metallurgy Line (Linia Hutnicza Szerokotorowa in Polish) an ends in the Euroterminal Sławków, 25 kilometres eastward from Katowice. With 395 kilometre length, it is the longest broad gauge line in Europe. It was constructed in the 1970s for transporting iron ore and coal from Ukraine to Katowice Steelworks. PKP LHS started managing the line in 2001. Ever since, it has aimed to attract other types of freight.

“The Euroterminal Sławków is really equipped to deal with all types of freight”, said Adamska. “Not only bulk, but also containers.” The terminal was opened in the early 2000s and has all necessary infrastructure for transferring containers from broad gauge rolling stock to European gauge wagons as well as to lorries. Moreover, it is connected with the port of Gdańsk and to the intermodal terminals of Maddaloni in Italy and Schwarzheide in Germany.

One way of attracting new types of cargo has been by running new routes to China. Since 2018, the company has been gaining successes in this field. That year, it launched a rail freight service from Sławków to Urumqi via the Middle Corridor. In January 2020, the first train from Xi’an arrived in Sławków. A service connecting Chengdu is in the pipeline.

Aleksandra Adamska will be speaking at the RailFreight Summit in Poznan. She will take part in the session about route developments in and around Poland. This session takes place on the second day, 2 September. Here you can have a look at the programme. You can register here.

This article was co-authored by Mykola Zasiadko.

Below you can watch the RailFreight Live show with Aleksandra Adamska: