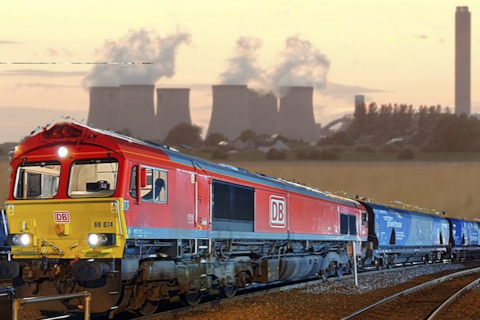 Sustainable energy generator Drax and rail operator DB Cargo UK have signed a new, five-year deal for the conveyancing of biomass. This will be the supply to fire the Drax power station in Selby, Yorkshire. DB Cargo UK, the incumbent rail haulage partner with Drax, will continue to ship biomass pellets, delivered to UK ports from North America, direct to the eponymous power station complex.

Commensurate with the size of the power station, the contract calls for the delivery of 60 trains per week, from the ports of Hull and Immingham. The new contract builds on the experience of the two companies working together. The frequency of the deliveries require a slick and reliable operation.

DB Cargo UK had the unwelcome opportunity to prove themselves earlier this year, when flooding disrupted the routing of trains through Selby. Nevertheless, services were maintained, and the power station that delivers around a tenth of the nation’s electricity was able to continue uninterrupted operations.

“We are delighted that Drax has chosen to extend our existing contract with them for another five years”, said Roger Neary, head of sales at DB Cargo UK. “We are proud of the important role our people continue to play in delivering an efficient and sustainable source of renewable energy for use here in the UK.”

Bulk carrier ships deliver prepared wood pellets – a timber product – from three purpose-built plants in the southern United States. They are shipped in bulk from the Gulf of Mexico to UK ports. DB Cargo UK haul the cargo, in loads of around 1,650 tonnes per trip, by rail to the power station. For the port operators, the contract represents a continuation of existing operations, and a steady fleet of cargo vessels crossing the Atlantic.

The fuel source is considered to be a renewable, and replaces the coal for which Drax was originally designed. The hopper wagons were rebuilt from coal hoppers to handle the wood product.

“These rail deliveries are a critical part of our global supply chain for sustainable biomass”, said Mike Maudsley, UK portfolio generation director at Drax. “That supports thousands of jobs and has delivered economic growth across the north of England, while supplying renewable electricity to millions of homes and businesses.”

Having converted two thirds of Drax power station to use sustainable biomass instead of coal, the company says the facility has become the biggest renewable power generator in the UK, and the largest decarbonisation project in Europe.

It’s not a new contract!! It’s a renewal of an existing contract! the word NEW is misleading!