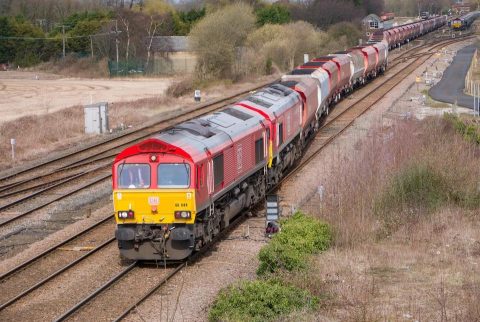 DB Cargo UK hauled their heaviest load yet, with a very traditional cargo of over 4000 tonnes of high grade coal, destined to keep British Steel fired up and producing from their Scunthorpe plant in Yorkshire.

Coal may no longer be king, but there is still demand from the furnaces of the heaviest industries in the UK. When it comes to moving the fuel of the industrial revolution around the country, there has only ever been one serious solution. Rail.

What was once the sound track of urban Britain – the coal train clattering through the night of every colliery town in the country – has long since been silenced. Domestic deep mining is no longer part of the industrial scene in the UK, but coal is not quite off the tracks just yet.

While the environmental agenda moves rapidly away from fossil fuels, and mining is almost consigned to the history books, imported coal arrives at deep water ports in the UK, with Redcar among the busiest.

Last week, it was from that North Yorkshire port that DB Cargo UK hauled 4098 tonnes the 100-odd miles (160km) to British Steel Scunthorpe, in neighbouring South Yorkshire. The load represents a new record haul for the company, and took a pair of industry-standard class 66 diesel locomotives for the move. The Scunthorpe plant, which was recently acquired by new Chinese owners, specialises in what the industry calls long-products, and is the primary producer of rail track lengths in the UK.

“Fantastic teamwork with our Network Rail colleagues saw us run our heaviest ever jumbo train for British Steel”, said DB Cargo in a statement. “The train weighed 4098 tonnes and was made up of 42 hopper wagons”.

Drawbar envy around the world

The working attracted quite a lot of ‘drawbar envy’ from at home and abroad. Some correspondents say heavier trains operate on the UK network, and there are certainly much heavier workings abroad.

“Coal trains here are 8,000ft long (almost 2.5km) and weigh over 20,000 tons!” So said an excited Canuck, who is used to traffic that spans more than one province at once. While dwarfing UK operations in those terms, Paul Clews, an independent consultant in the UK did reply that the traffic considerations here were rather more intense. than those operating in Canada, on a class 1 railroad dedicated to freight, “DB have achieved a good tonnage here on an intensive network. Canada runs around 500 trains per week which is a moderate day shift at Clapham Junction here”.

Not to be outdone, Martin Trellis weighed from Sydney with a reminder that BHP, the vast Anglo-Australian multi-national mining, metals and minerals corporation, tops the lot. “In the Pilbara, Western Austrailia, we run 270 wagons 2.9kms long 43000 tonne iron ore trains”, he said. “All single manned. Pain when you set off hot box detector”.

BHP run about nine trains a day on the line, which connects mining operations with port facilities, over 270km away, across the Australian desert. Rather fewer trains than pass through Clapham Junction on a moderate day, everyone agreed.