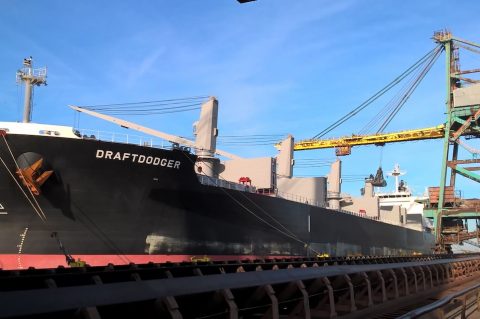 A busy week for the deep water port on the east coast of England. Redcar Bulk Terminal reports a full timetable of rail movements, keeping British industry in business during the current crisis.

Not everything comes in a box. Intermodal traffic may be the most recognisable part of the British rail freight scene, but bulk loads are the order of the day at places like Redcar.

Formerly dedicated to serving the defunct steel works, Redcar Bulk Terminal has carved out a niche for deep sea operations, berthing what mariners recognise as ‘cape class’ freighters, drafting down to 17 metres, and too big for the Panama or Suez Canal.

Put that another way, take a common-all-garden class 66 locomotive; stand it on its end, and these leviathans of the seas have almost that much metalwork under the waves. Emptying one takes a while; and a more than a few trains.

Unloading those vessels takes equally impressive shore-side logistics. Rail-born cranes and grabs reach into the cavernous hold. Conveyors pile up the cargo in mountains of minerals. This is heavy industry at its heaviest.

“Included in our busy rail schedule this week are six jumbo trains each hauling 42 rail wagons with a pay load of circa 3,000 tonnes”, says the terminal management.

The heavily laden trains require all the power they can get to pull way from the quayside. A double of DB sixty-sixes move a shed load at a time. Even so, with ships berthing with loads like 80,000 tonnes in the hold, it is a mammoth operation to transfer everything from minerals from the mid-Atlantic to anthracite from South America. “Coke from Columbia”, as one witty fan put it.

The facility could have gone the way of the traditional industries of the region. However, following the closure of the Redcar steelworks in 2015, the terminal has diversified away from traditional coal and iron ore imports, and the active management has been busy marketing its unique assets to the wider ports and logistics sector.

This week, that is paying off handsomely, and the terminal is running like Grand Central. It is one of the busiest locations on the freight scene and the network at large.

Rail is crucial to the operations, especially in a busy week. The 36,000 tonnes those six trains will move makes all the difference locally. “This reduces road traffic and during the current lockdown due to Covid-19 rail traffic also reduces the human element ensuring social distancing”, claims a Terminal statement.

Lockdown or not, those numbers make difference at a national level. What ever the future may hold, busy weeks for Redcar are good news for the nation. May there be many more weeks like this one.

Modal split rail through the Alps highest in 25 years

This week in RailFreight Live: foldable containers and e-fueled locs