Increase in freight train kilometres in the Netherlands

The number of freight train kilometers on the freight dedicated Betuweroute grew by 4 per cent. On the combined railway network, freight transport increased by 3 per cent. Dutch infrastructure manager ProRail reported these numbers last Friday.

In total, 1.5 million freight train kilometers were counted on the Havenspoorlijn last year. This was partly due to the 4600 extra train journeys made on this route in 2018.

More train kilometers were also made on the Betuweroute, totalling 2.3 million. This is despite an increase in construction work on the Third Railway, a capacity expansion of the German part of the Dutch Betuweroute.

Although an increase has been recorded on the Betuweroute, the construction works caused part of the train journeys to relocate to the combined network. This ensured for 6 million train kilometers covered on the railway lines used by both passenger and freight traffic.

It is noteworthy that the construction work on the Third Track was not the only factor of influence on these numbers.Growth on the combined network is also driven by the increase in rail freight transport in general. For example, more container shuttles were running between Rotterdam and Blerick: from four to five a day in each direction.

ProRail points to the coal and containers segments as an explanation for the increasing volume of rail freight transport. Due to the low water level in the second part of 2018, many shippers were forced to shift their goods by rail instead of inland shipping.

After the water levels had risen, some of the shippers decided to continue using the rails. According to ProRail, they did this in order to limit supply risks.

The closure of the last German coal mines at the end of 2018 also contributed to an increase in coal trains in the Netherlands. “The demand for coal is still there, so they are now being imported via Rotterdam, among others. In comparison with 2018, seventeen hundred coal trains moved last year to and from Rotterdam”, writes the infrastructure manager. 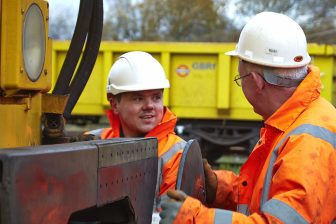