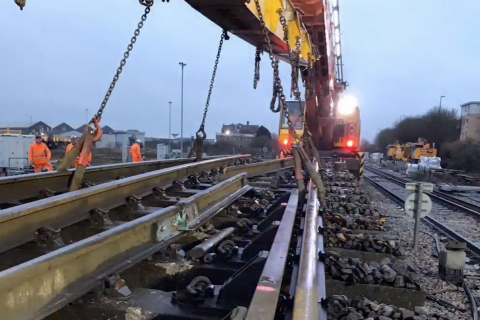 Britain’s freight network remains disrupted by two significant derailments in the last week of January, the effects of which are likely to be felt for months.

At one scene, in Hampshire in the south of England, Colas Rail UK has been working hard to repair the extensive damage at Eastleigh, just north of Southampton. Heavy lifting gear has been deployed to remove the derailed rolling stock. Six loaded intermodal flats came off the rails. See more details here: Eastleigh derailment.

A specialist team was called in to clear the lines, lead by Colas Rail UK operations manager, David Thomas. He said his team have been working tirelessly throughout the night re-railing the wagons and replacing the damaged track. Network Rail, the UK infrastructure manager, has said that 160m of track, third rail electricity supply and lineside infrastructure needs replacement. The area is part of the UK’s ground-level, third rail electrified network, which covers much of the south east of England.

Operations carried on round the clock over the weekend, to facilitate a partial resumption of rail operations on Monday. Temporary plain track work has been laid, but without reinstated points, some workings are unable to take place. Network Rail has stated that there is considerable damage to the permanent way – far more than originally anticipated. “Significant work is required to reinstate the infrastructure. However, the temporary track has been installed to enable the railway to be reopened while a full repair is planned and delivered”, said a Network Rail statement.

Some sources are speculating that a full resumption of services through Eastleigh will not be possible until some time in March.

In the north of London, rail operators and users seem resigned to a very lengthy blockage on the east end of the Barking – Gospel Oak line. Here, a very extensive derailment caused massive damage to a long stretch of the mixed use line. First reports here: Barking derailment.

Given the extensive nature of the damage, Network Rail has not issued any update since the end of last week. Over 6000 sleepers will need replaced, along with repairs to several bridges damaged in the incident, where a freight service partially derailed and dragged part of its consist over a distance of 2.5 miles (4km). The passenger operator, Transport for London, has reverted to a message saying the line is closed until further notice. Freight operators have said they will make alternative arrangements, although daytime paths will be at a premium, and some services will have to be rescheduled.