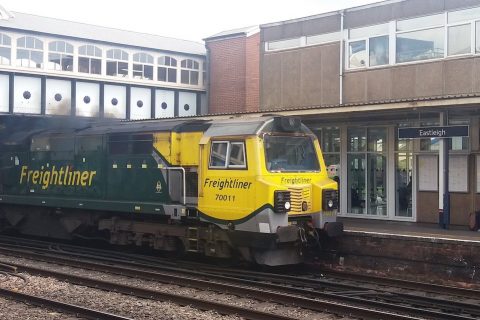 There is more disruption to UK freight services as a second major derailment within a week brings south coast services to a halt, with an intermodal train off the rails near Southampton.

Hard pressed engineers on Britain’s rail network found a new problem on Tuesday, after an intermodal service derailed while crossing Eastleigh station, just north of the port of Southampton on the English south coast. The incident comes just days after a serious derailment closed another vital freight route in the north of London (Barking – Gospel Oak badly damaged).

Just before noon on Tuesday (28 January) an intermodal service, pulled by Freightliner Powerhaul diesel 70001, derailed across what local news pictures appear to show as the south end of the passenger station at Eastleigh, in Hampshire. Some wagons appear derailed and containers dislodged.

A busy commuter town in its own right, Eastleigh is a transport hub, 73 miles (117km) south west of London. The layout has junctions north and south of the station, hence the considerable disruption.

The main passenger operator, South Western Railway said on their website this morning: “Due to a derailment of a freight train between Southampton Central and Winchester all lines are blocked. Train services running through these stations will be cancelled, delayed or diverted via Havant. All stations between Winchester and Southampton Central will not be served. Disruption is expected until the end of the day”.

The blocked line forms the main freight artery northwards from the port of Southampton, to destinations in the English Midlands, Manchester and the north of the UK. It shares tracks with a busy commuter route via historic Winchester and Wimbledon into London. Infrastructure manager Network Rail is investigating the incident and is in attendance. Assessment continues during Wednesday, with hopes that issue can be resolved quickly.

While not nearly as severe as the Barking derailment reported earlier, passenger services are expected to be disrupted, delayed and cancelled for at least another day. Freight services from Eastleigh are curtailed. Potential freight diversionary routes are available from Southampton.