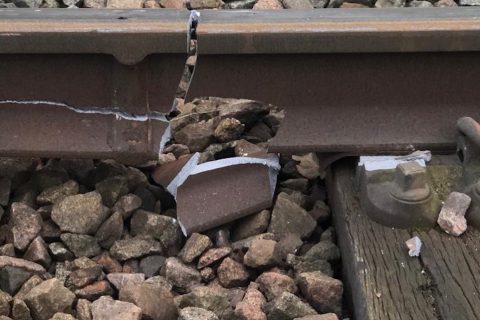 Engineers are working round the clock to restore the Barking to Gospel Oak freight and passenger route. London commuters and UK-wide freight operations face their first full week of disruption after a derailment caused extensive damage to 2.5 miles (4km) of track and infrastructure on Thursday morning (23 January). The railway is an arterial line to northern London.

The full extent of the damage to the Barking – Gospel Oak line has become apparent, as rail operators face the disruption of the serious derailment, which has closed the line.

A statement from Network Rail, the UK’s infrastructure manager, said that just after 6AM in the morning of Thursday 23 January, a freight wagon derailed between Leyton Midland Road and Walthamstow Queens Road stations on the eastern stretch of the Gospel Oak to Barking line, a very busy mixed use line in the north of London.

The statement said the derailment had caused extensive damage over a two and a half mile stretch with a number of sleepers completely split in half. Eight bridges were also damaged along with signalling and other operational lineside equipment.

After being run down in the later decades of the twentieth century, the line has seen a renaissance in the last five years, following an extensive upgrade as a critical freight route – part of the orbital route around north London – providing connections to all the main north-bound radial routes from London and access westwards by avoiding lengthy detours. It is also a heavily used commuter route, serving the resurgent areas around London’s East End, Olympic Park and Stratford, with multiple interchanges to other parts of the London transport system.

The line is critical to freight operations, with DB Cargo, GB Railfreight and Freightliner among the regular users. Network Rail engineers have been on site since shortly after the incident. It is likely that restoration work will involve multiple contractors and extensive diversions of freight services. Passenger services remain suspended. Network Rail intend to update on later on Monday.