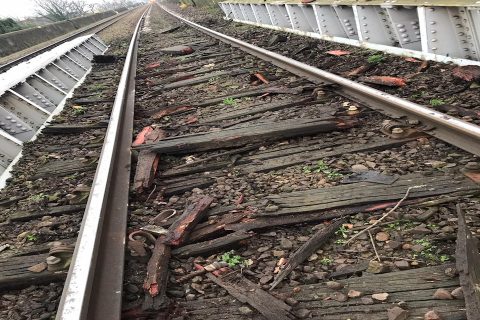 Published on 30-01-2020 at 17:51
Bridge and track damage near Barking after freight derailment

Southampton and London are off the rails. Two significant freight derailments have hit UK operations in the last week of January. Both have blocked vital freight arteries and both are proving complicated to resolve. Routes out of Southampton will take days to repair, but the north of London will see a closure for several weeks.

Latest updates from train operators and Network Rail say that it is going to be some time before services for freight and passengers get back to normal on two routes in the south of England. While Eastleigh in Hampshire is expected to be back in operation in a matter of days, possibly by Monday, the story at Barking is far more serious.

Earlier on Thursday, Network Rail reported part of an intermodal service had derailed. “We are dealing with a complex situation involving the derailment of six wagons that has taken much longer than was initially expected,” said an official statement. Full Eastleigh report here.

Despite this, there has been good progress made, and some lateral thinking means that Eastleigh will be open, at least in part, early next week. “We now expect the majority of services to run from the morning of Monday 3 February, but continue to do everything possible to open the railway sooner,” said a spokesperson. “Following the derailment there is extensive damage to the track and our engineers are working around the clock to get the railway back open as quickly and as safely as possible. To do this we are installing temporary track and will make alterations to the signalling and power supply as the full repair will take more time”.

The layout around Eastleigh is complicated. In addition to a busy commuter station, which serves nearby Southampton and long distance services to London, there are junctions directly north and south of the station, and extensive freight facilities, including a rail recycling plant.

There will certainly be need for rail at Barking in the north of London. That incident, last Tuesday, saw an early morning freight service drag derailed stock over 2.5 miles (4 km) of track, wrecking the permanent way. Transport for London is playing down the incident which, nevertheless, has closed services between seven stations on the east end of the Barking – Gospel Oak Overground line. Full Barking report here.

RailFreight.com has found the freight industry is being stoical about the disruptions, and responding with initiative and innovation. Some operators have escaped any interruption to their operations. DCRail is counting itself lucky in this instance. “Fortunately neither are having a negative impact on us”, said their director of rail, David Fletcher. Ford, who recently signed a new deal to move cars from their facility at Dagenham, nearby Barking, said there was no disruption to their operations. Other operators are assessing their situations.