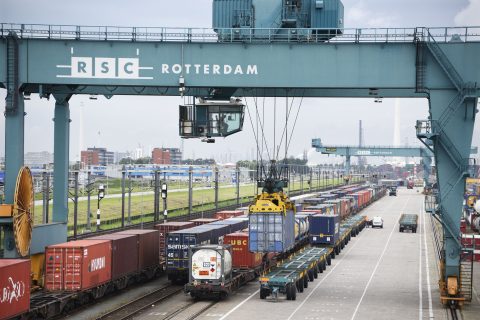 Temporary stop for hazardous goods in Port of Rotterdam

Dutch infrastructure manager ProRail has halted shunting with hazardous substances at the Waalhaven yard in the Port of Rotterdam. After research last Friday it became clear that the fire extinguishing water facilities do not meet the safety requirements. The impact may be huge. DB Cargo holds ProRail accountable for any damages suffered.

Because the fire extinguishing facilities do not function properly, the fire brigade and ProRail incident prevention team cannot perform their work properly. Operations may be disrupted for a longer period of time. Alternative shunting locations are currently considered for shippers, however, the transport of dangerous goods to and from the port of Rotterdam may be hindered by diversions and delays. The exact impact on the logistics operation in the port region is still being mapped out by ProRail.

On its website, ProRail states that it is aware that rail freight transport is being greatly affected by the decision to halt shunting with hazardous substances. The infrastructure manager is working on a new solution, “to enable customers to shunt with hazardous substances again as quickly as possible.” Direct train traffic can continue to run as normal.

Hans-Willem Vroon of lobby organisation RailGood says it is important that ProRail provides services to shippers and freight carriers in “a crisis management approach with ProRail and the port of Rotterdam”. “This should never be a second Rastatt. ProRail must quickly apply lessons learned to prevent repetition. The infrastructure must be in order. That is much more important than a lower user fee. The rail product of the port of Rotterdam is embarrassed throughout Europe. Trust in shippers is eroding”, he comments.

An additional problem occurred in the main shunting yard of the Netherlands, Kijfhoek. In response to the Waalhaven shutdown, ProRail demanded a number of tracks at the Kijfhoek sorting station for operations that were originally planned at Waalhaven. However, this withdrawal coincided with renovation work, which put several parts of the yard out of service.

According to DB Cargo, the main customer in Kijfhoek, the company was hit twice. “The usage restrictions thus not only affect DB Cargo train traffic to and from Waalhaven Zuid, but also the car loading process at the Kijfhoek sorting station”, it wrote in a letter to its staff. DB Cargo added that it holds ProRail liable for “all damage that it suffers as a result, and possibly will suffer”.

ProRail has been working for some time on a solution that should, among other things, improve the fire extinguishing capacity at the Waalhaven yard. This solution must be ready by the beginning of 2020. ProRail has taken temporary measures for the intervening period. “However, during a test on 13 September, those measures proved insufficient,” said ProRail.

In her letter, Van Veldhoven states that, in addition to Waalhaven South, a track at Europoort was also out of service due to the current maintenance situation “which meant that shunting work had to be relocated and a number of terminals were not available for several days”. The track at Europoort was completely renewed and put back into use in September.

According to the state secretary, the situation on the yards shows “the importance of infrastructure and safety facilities”. Earlier this year, the Ministry of Infrastructure and the Environment invested 30 million euros for the infrastructure of the Port of Rotterdam railway line.

ProRail has recently set up a task force to identify the areas that need to be dealt with as a priority. An accelerated process has been set up to make necessary replacements. “The most urgent replacement work will be carried out and completed this year. In addition, ProRail is now working on a proposal for tackling the remaining locations”, says Van Veldhoven.

Would you like to receive the weekly newsletter of RailFreight? Please fill in your email address: