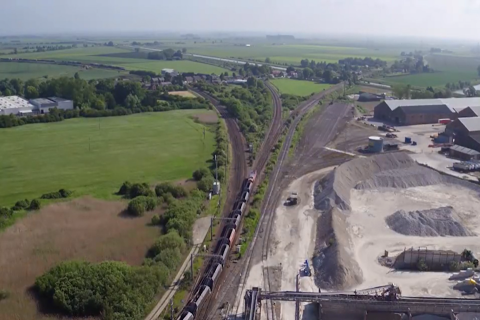 A badly needed freight route upgrade could be ditched in a bonfire of investments. That is the fear of the East of England All Party Parliamentary Group, who represent political and commercial interests in the region. They say that the Ely upgrade project could be in the firing line amid rising costs and dwindling treasury coffers.

According to local media, the group, which represents around twenty regional interests, has pressured the UK government to reaffirm its commitment to the Ely upgrade project. However, with Westminster still in turbulent times, and the ministers to whom the group addressed their concerns now already out of their jobs, there seems little chance of an answer any time soon.

Network Rail, the infrastructure agency and the promoters of the Ely Area Capacity Enhancement scheme, have expressed no such intentions to shelve the project. “The railway through Ely is a vital part of the rail network that includes a busy junction where five railway lines converge and is currently operating at full capacity, limiting the opportunity for growth of important routes for passenger and cross-country freight services”, says NR.

Ely itself is a modest cathedral town, but it sits at the heart of a network of railway lines, making it an indispensable junction, clearing traffic in all directions. The undeniable demand for more capacity comes from freight movements. The primary driver in that regard is intermodal traffic generated by Felixstowe, Britain’s busiest container port. It is also one of the busiest rail freight terminals in the country, and it’s only getting busier.

Looking for friends on the inside

There is no word from the government on the future of the project. That may not mean anything at all since there is no word from the government on a whole range of projects and matters of state. “This is a vital piece of regional infrastructure”, said Mid Norfolk member of parliament George Freeman, who already has a track record of campaigning for rail network improvements. “[It] is a bottleneck on both passenger services from Kings Lynn and Norwich to Cambridge and freight links”, he said.

With the cost of everything rising and the government’s fiscal policy somewhat discredited, the worry is that everything is up for review, no matter how important it may be. The All Party Group voices these concerns and possibly expected a better response from Westminster. After all, former prime minister Liz Truss is among their number. It’s always good to have a contact in Downing Street. At least, it was good to have a contact in Downing Street until Liz resigned last month. Proof, if proof were needed, that politics can have a profound effect on the railways.

However, benefitting of unique advantage, of UK (ports) calls for a sound, sustainable, for an optimal infrastructure!
(Current standards, optimal when steam was shifted out, now is costly – and regrettably means cementing and in fact obstructing, when maintained.
Soon it is 2023 and since long ware owners have shifted strategy, to On Demand.)
Quality pays and within transports, now more than ever!
At main lines, Shift can be performed, within a 10 year period, and handsomely paid for…

Ely is a special case because it is the throat which chokes rail traffic to & from Felixstowe & King’s Lynn#; couple this plan with dualling F’Stowe to Ipswich & you have a new modal lifeline to the midlands & beyond for imports & exports.