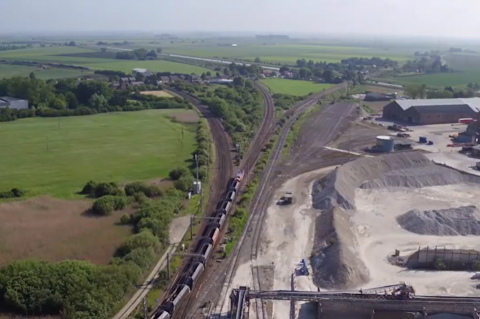 Fears have been expressed that upgrading the railway infrastructure around the Cambridgeshire town of Ely may be postponed, cut back, or even scrapped. As reported last week by RailFreight.com, the alarm has been raised by business stakeholders and a coalition of elected representatives from the East of England All Party Parliamentary Group. The parties have formally addressed the Secretary of State for Transport, Grant Shapps, to clarify the position urgently.

The Ely area capacity enhancement programme (EACE), devised and promoted by the national infrastructure agency Network Rail, has been put in jeopardy, according to claims from parliamentary insiders at the East of England All Party Parliamentary Group. Urgent questions have been raised in the UK parliament’s House of Commons, asking for clarity and confirmation that the project will be fully funded in the long overdue projects document, the Rail Networks Enhancements Pipeline (RNEP).

Funding not yet approved

While the Department for Transport (DfT) has been grabbing the headlines for announcing their prestige project to digitally enhance the East Coast Main Line, fears have been expressed that the one billion pounds (1.3 billion euro) price tag will be met by curtailing other projects – among them the Ely Area Capacity Enhancements programme.

The outline Business Case for Ely was submitted three months ago to the DfT after several rounds of public consultation on the project’s specifics. Funding for the next stage of the design process and future funding decisions on the Ely project are dependent on the Department for Transport following the Rail Networks Enhancements Pipeline (RNEP) – which is also a much delayed set of guidelines expected to outline the shape of the future network, and long demanded by the industry as a clear route map, giving stability to the supply chain and operators alike. Without successfully securing funding for the next phase of design, Network Rail or its successor Great British Railways will be unable to submit a Transport and Works Act Order – a legal act passed by Parliament which will enable all the necessary powers to develop the project on the ground.

Concerns are that the critical part of the project is the enhancement of connections from the east to the north – effectively opening up rail freight opportunities for Felixstowe to serve the Midlands and North – a strategic flow currently in the hands of road operators and a constant stream of heavy goods trucks on the routes out of the port, principally the congested A14 arterial road, which connects the port directly with the logistics’ Golden Triangle’ of the Midlands.

In a debate on the subject in the House of Commons last month, several members of Parliament, principally from the East of England, raised questions challenging the government to confirm its intention to follow through with the Ely project. Answering concerns, the minister of state at the DfT, Wendy Morton, acknowledged the keenness of her campaigning colleagues but was not to be drawn on a definitive confirmation. “We want to provide as much certainty as possible on rail enhancements, and we will set out our plans, including our proposals on Haughley junction [another location connecting Felixstowe requiring upgrading], in the upcoming update to the rail network enhancement pipeline.”

Felixstowe, etc., gates of Nation, duly has to be awarded top modern, high quality railways, etc.
(Regardless of Brexit, nearness, to and within Hemisphere, Goal of EU membership…, safely shall be present.)
Quantity, yes, but timely, high quality.
A compatible, a New Old Railway, robust, upgraded and with “height” for further added loads, etc., thus resilient, by added capacity, sustainably provides for utilisation, of assets. (Short heavy trains are better, than long, etc.)