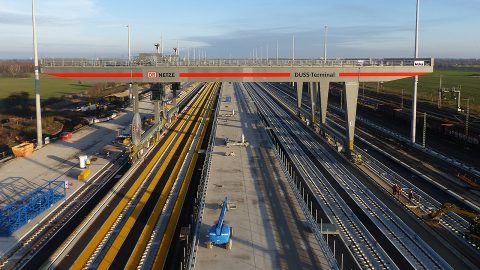 These were the findings from a study done by the Frankfurt-based consulting company d-fine GmbH, on behalf of the International Union for Road-Rail Combined Transport (UIRR). Expanding zero-carbon combined transport is essential in achieving the European targets of 55 per cent greenhouse gas reduction until 2030 and full climate neutrality by 2050, was the key message they put forward at the presentation of the report last Thursday, 23 May.

Not a dream scenario

Completely carbon-free transport from door-to-door seems like a dream scenario, but is not at all something we should only envisage in the distant future. Cargo handling at the Cargo City Wien Süd and Megahub Lehrte terminals, for example, is already CO2-free, thanks to the use of green electricity and shunting-free operation.

Rail transport is inherently more efficient than road transport because of low rolling resistance, aerodynamic advantages, and topology advantages, the researchers pointed out.

“With the widespread electrification of railway main lines, rail freight transport is locally emission-free as standard and progresses towards zero-carbon through commitments by railway undertakings to use renewable electricity”, Sickenberger notes, adding that the combination with battery-powered vehicles for short road sections of less than 70 kilometers can lead to rapid and efficient reduction of greenhouse gas emissions.

The widespread use of door-to-door road-rail combined transport is expected to deliver a pro-rata energy efficiency increase of between 40 per cent and 70 per cent compared to long-haul trucking. A further energy saving can be achieved with the introduction of longer trains, of over 740 metres, and the widespread roll-out of new Digital Automatic Coupling (DAC). Both are expected to help deliver savings of up to 90 per cent in CO2 emissions and up to 70 per cent in the energy used.

A sharp fall in battery costs is expected to support greater deployment of electric locomotives on European networks with battery prices predicted to fall by up to 70 per cent, the researchers explained.

“As the technology required for zero-carbon door-to-door combined transport is not only available but has also already proven its practical suitability in numerous industrial applications, the European decision-makers should now push this climate-friendly solution with all determination”, Ralf-Charley Schultze, president of UIRR President said.

“Therefore, suitable measures must be taken as quickly as possible to expand the existing zero-carbon transport services into a Europe-wide zero-carbon transport network. Those responsible should concentrate on defining the political goals and creating a fair legal framework. The optimal solution should then emerge on the basis of fair competition based on technical merits and management excellence.”