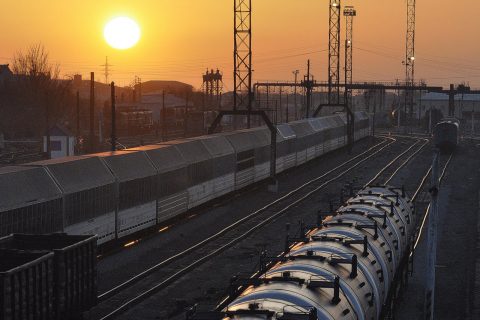 The global market for rail technology has survived the COVID-19 pandemic relatively unscathed. Despite a slump of 8 per cent in 2020, the expectation is that the market will grow with 2.3 per cent annually in the next five years. This is the assessment of the “World Rail Market Study: Forecast 2020 to 2025”, which Roland Berger conducted on behalf of UNIFE, the Association of the European Rail Supply Industry.

“The rail transport market has been hit by the pandemic, which has temporarily interrupted the strong growth that we were experiencing. Nevertheless, after a challenging 2020 we are confident that the various stimulus plans together with the increasing demand for sustainable mobility solutions will lead to a solid market recovery, translating into a 2.3 per cent compound annual growth rate between the periods 2017-19 and 2023-2025”, said Henri Poupart-Lafarge, chairman of UNIFE and chairman and CEO of Alstom.

A record market volume of 177 billion euros was reached at the end of 2019, proving the appeal of rail transport in all of its forms. This ranges from urban metro to commercial freight. The sector has grown by 3.6 per cent annually since 2017.

The strongest driver was the rolling stock segment (up 6.8 per cent), followed by rail control solutions (up 4.1 per cent) and the infrastructure market (up 2.3 per cent). By comparison, growth in the services market was rather moderate at 0.9 per cent. The total market volume is expected to reach EUR 204 billion by 2025.

Looking at the global distribution of growth, it becomes clear that, “the Asia-Pacific region and Western Europe made the largest contribution to the positive development of the entire market with 5.3 per cent and 3.8 per cent respectively”, as Andreas Schwilling, Partner at Roland Berger, explained. Compared to the last study, only the Africa/Middle East market showed a slight decline (-1.2 per cent), while all other markets grew.

Different global developments are likely to continue to fuel rail market growth in the future. “Megatrends such as urbanisation, global population growth and growing environmental awareness will lead to higher passenger numbers, while digitalisation and automation will make the rail sector more attractive”, said Andreas Schwilling.

He added that the increasing environmental awareness shown by political programmes such as the European Green Deal, the planned shift of traffic to railways and the inevitable expansion of public transport in major cities would also guarantee the positive development of rail. However, public funding will need to be ensured and sustained to achieve that progress.

On a less positive note, the study warns that International trade barriers, such as shrinking accessibility in Asian markets, have developed into serious impediments to rail sector growth. As a result, the share of the world market for railroad technology that remains accessible to European companies has shrunk slightly from 63 per cent to 62 per cent since the 2018 study. A market volume of 67.1 billion euros remains unattainable for European companies and this could be worsened by the current economic downturn.

“The market should be equally open to all rail suppliers, whether domestic or foreign”, stated Philippe Citroën, Director General of UNIFE. “A level playing field is crucial for efficient rail systems, and we call on institutions to ensure that competition is fair as a means of preventing any further decline in market accessibility.”