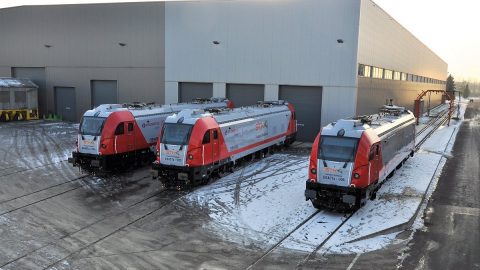 Polish private rail freight operators STK and CTL Logistics have entered into service five brand new Dragon 2 locomotives designed and produced by Polish rolling stock manufacturer Newag. The carriers have become the users of these type units during this week.

STK will use three Dragon 2 locomotives to deliver mostly bulk cargo from the Polish town of Silesia to the Baltic ports of Gdynia and Świnoujście. The operation network of the new units is determined by OT Logistics Group that owns STK, several barge terminals on the Oder and other seaport facilities in Gdynia and Świnoujście. STK intends to purchase more Dragon 2 locomotives in 2019-2022. The number of these units will be announced later. At the same time, CTL Logistics received two Dragon 2 units. The company will use them on its routes in northern Poland

The first Dragon 2 electric locomotive was presented by Newag in July 2018. It is a new generation of Dragon platform having been developed by Newag since 2009. The six-axle locomotive is capable to pull a 40-car freight train with a brutto weight of 3200 tonnes. The Dragon 2 unit can speed up to 120 kilometres per hour. The main feature of this type is its ETCS level 2 safety system and compatibility with Technical Specifications of Interoperability (TSI 2014).