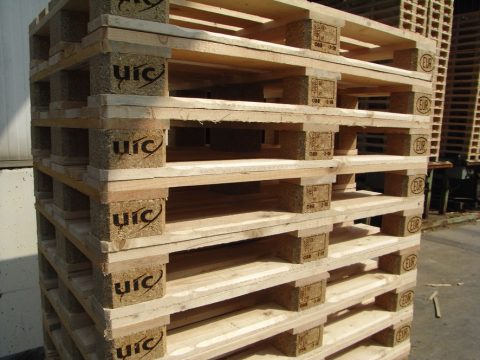 The International Union of Railways (UIC) has strongly protested at a sudden decision to end a deal which lets freight operators share pallets. This has been blamed by the European Pallet Association (EPA) on criminal gangs’ use of fake pallets and issues over quality.

UIC said the decision by the EPA, the licensing organisation responsible for the European ‘pool’ of freight pallet exchange, was ‘incomprehensible’. It added that trademark infringements were ‘regrettably a fact of life’.

EPAL said the decision to end a deal which was struck in 2014 was due in part to the ‘uncontrolled’ import of counterfeit pallets from gangs in eastern Europe, which it said jeopardises the safety of the European Pallet Pool. This pool is the system under which standard freight pallets are used.

Responding, the UIC said it would jeopardise the pallet pool as a solution which is advantageous in terms of price when compared to other options such as pallet hire. Repealing the deal would ‘create uncertainty’ among members and other users, which include numerous rail freight transporters.

In 2014 Rail Cargo Austria, acting on behalf of the community of UIC members and EPAL, signed an agreement for the unrestricted exchangeability of UIC/EUR and EPAL pallets, which are used by rail freight operators across the continent. But EPAL said little had been done since by UIC to protect the quality and safety of pallets, and that in some countries UIC did not manage the exchange system at all. Furthermore, UIC had ‘declined’ EPAL’s offer of assistance on quality assurance and trademark protection.

EPAL said it had research that more than four million counterfeit pallets, originating from the Ukraine, were in circulation. The ending of the agreement takes effect from May 1.

“East European gangs for the main part are increasingly counterfeiting UIC/EUR pallets, since it has become riskier to counterfeit EPAL Euro pallets due to the joint action of EPAL, customs authorities and lawyers,” added Mr Leibrandt. “EPAL assumes responsibility for the quality and safety of the EPAL Euro pallet pool. The industry, retail and logistics sectors can count on that.

“In view of the negative consequences of the UIC’s conduct, EPAL no longer considers itself able to continue to recommend the exchange of EPAL Euro pallets with UIC/EUR pallets. Terminating the exchangeability agreement is in EPAL’s view the only option to effectively protect the quality and safety of the EPAL Euro pallet pool in the future.”

The UIC responded: “The argument that UIC pallets are counterfeited is divorced from reality. Trademark infringements are, regrettably, a fact of life for all pallet manufacturers. UIC takes a tough line on all forms of fraud. UIC protests in the strongest terms against the grounds given for terminating the agreement, which cite shortcomings in quality assurance and the approach taken on trademark infringements by the responsible UIC railway undertakings.”

In December the UIC led an operation involving partners in Belgium, Austria, Germany and the Ukraine to seize thousands of counterfeit pallets. Four trucks originating from the Ukraine were found to be carrying pallets stamped with the official UIC/EPAL logo when they were stopped in Belgium near the Dutch border.

“Quality failings have no place in the UIC network,” added the UIC. “For us, the safety and quality of our pallets have top priority. Both the UIC member railways individually and RCA, as the owner of the EUR brand, take a range of measures.

“In order to ensure that our EUR pallets meet the requisite quality standards for our customers and partners, the UIC member railways use independent testing agencies such as SGS Germany GmbH. With over 40 years of experience in this field, SGS is a world leader in testing, checking and certifying pallets.”

Fake EUR pallets, it said, were a ‘major risk’ to the safety of users and goods in transit.

“The UIC member railways take a proactive approach on counterfeiting, and take all appropriate measures to stop fakes, in collaboration with national authorities – all the more so since they are not only the licence-issuers of EUR pallets but also use them for transshipment and in their own freight services.

“EPAL’s decision to terminate the agreement will jeopardise the pallet pool as an enduring, open solution which is advantageous in price terms compared to other systems such as pallet hire. Repealing the agreement will create uncertainty amongst users.

“UIC and its member railways will continue to consider both pallet brands as equivalent and exchange them in future, since we still believe in and will stand up for a borderless, barrier-free pallet pool.”