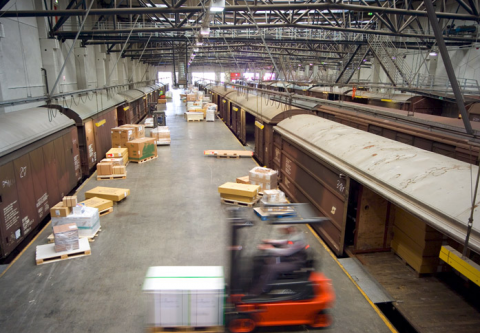 Thousands of counterfeit freight pallets were seized in an operation carried out by the International Union of Railways (UIC) with partners in Belgium, Austria, Germany and the Ukraine. Four trucks originating from the Ukraine were found to be carrying pallets stamped with the official UIC and EPAL (European Pallet Association) logos when they were stopped in a targeted check.

The operation took place near the Dutch-Belgian border, and was the result of intelligence between the UIC’s auditing agency, SGS Germany; Rail Cargo Austria; the Belgian Federal Public Service for Economy (FPS); Belepal, and EPA’s Belgian (Belepal) and Ukranian operations. Officials in Ukraine had suspected a Belgian firm was handling counterfeit pallets, which represent a safety risk if used due to their inferior quality.

EPAL has repeatedly warned European transport carriers of the potential for counterfeit pallets being used for the transportation of goods across the continent, such are the potential savings that can be made. Though they can be difficult to identify, the fake pallets are of poor quality and can easily break open during loading and unloading. Of the pallets seized in this operation, 90 per cent bore the EUR or UIC trademarks, and 10 per cent had EPAL markings.

“Fake EUR pallets represent a significant health and safety risk, both to users and during transport,” said the UIC following the operation. “The UIC member railways thus take a proactive approach to combatting counterfeiting, since not only are they licence-issuers and repairers of EUR pallets, but also use them for transshipment and in their own freight services.”

Testing agency SGS Germany confirmed at the scene that the seized pallets were fake, and confiscated them on behalf of the Belgian FPS. The UIC said that enquiries revealed the managing director of the firm involved, which has not been disclosed, is an EPAL licence holder. The operation was, it added, a ‘further refutation’ of recent allegations against UIC and its member railways.

In a statement, it said that inferior quality had ‘no space’ in the UIC network and that the ‘user is the clear focus’.

It said it ‘strongly rejects’ the content of some recent media articles about a ‘so-called inferior quality and lack of quality control’ on the circulation of EUR wooden pallets for international exchange. It was also committed to supporting a ‘regular exchange between users, railway units and providers, with the aim of offering a joint high quality standard for European customers’.

“In order to ensure quality for our customers, active prevention measures against counterfeiting are being defined and implemented. In order to ensure the quality level for our customers and partners, we are counting on independent auditing entities such as SGS Germany for checking the EUR pallets. Additionally, we are putting great emphasis on a certified safety management system to guarantee the highest possible standard.”

The European Pallet Association was founded in 1991 as the umbrella association of licensed producers and and repairers of EPAL/EUR pallets. It is globally responsible for the consistent quality of pallets, and uses an independent external quality inspection service.