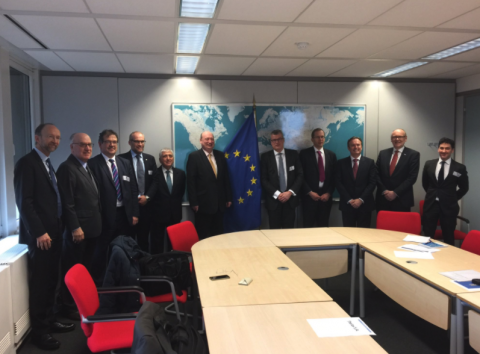 A consortium of companies created to develop the technical elements of the European Railway Traffic Management System (ERTMS) have signed letters of intent committing the project to the next phase. The companies’ CEOs met with European Union Agency for Railways (ERA) representatives to each sign a Memorandum of Understanding (MoU) supporting the recently-updated ERTMS European Deployment Plan.

The consortium, collectively known as UNISIG (Union of Signalling Industry), was established in 1998 at the request of the European Commission, and given the task of drafting the technical specifications underpinning the development of both the ERTMS and the European Train Control System (ECTS). Members include Alstom Transport, Ansaldo STS, Bombardier Transportation, Invensys Rail Group, Siemens Mobility and Thales Rail Signalling Solutions.

On January 5 the European Commission (EC) formally adopted the new Deployment Plan, which says that half of Europe’s core TEN-T Network Corridors that are so critical to the rail freight market will be equipped with ERTMS by 2023. The EC will then set out a precise timetable for the remaining corridors between 2024 and 2030.