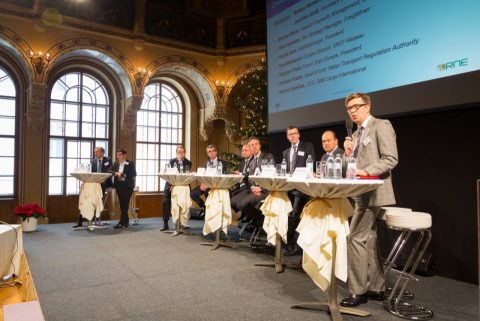 Rail freight must become a ‘more attractive and cost-effective option’ for all customers, a high-level meeting of European cargo stakeholders including ProRail and RailNet Europe has been told. The third annual European Union (EU) Rail Freight Day brought together more 100 representatives from across the member states in a ‘fruitful exchange’ of views on operational issues.

The European Rail Infrastructure Managers (EIM), ProRail, which manages the Dutch rail infrastructure and influential pressure group RailNetEurope were just some of the organisations at the event in Vienna, making their voice heard about key issues including the adoption of the Fourth Railway Package and the development of the TEN-T Pan-European transport networks.

Pier Eringa, CEO of ProRail, said: ‘’ProRail strongly believes in transport as a crucial enabler of a competitive European economy with a strong internal market. Rail transport is well-placed to deliver on the dual challenge of performance and sustainability – especially in the light of the COP21 agreement.

“However, rail – and especially rail freight – needs to become a more attractive and cost-effective option for all customers. In this regard, we confidently look at some of the EU initiatives to remove those technical and regulatory barriers in the rail sector: the Fourth Railway Package, Rail Freight Corridors, TEN-T and its funding or indeed ERTMS. If these initiatives are implemented in a smart way, rail will become more performant, dynamic, innovative and even safer than it already is.’’

Earlier this year the Ministries of the 28 member states used the TEN-T Days event in Rotterdam to commonly endorse a ’Declaration on Rail Freight Corridors’, which was supported and complemented by an ambitious joint statement from the sector. Six months on, the Rail Freight Day offered the chance to take stock of what has been achieved since and, crucially, what happens next.

EIM – the association representing rail infrastructure managers in Europe – said it welcomed the outcome of the event and the fruitful exchanges on how to make rail freight more attractive and customer-oriented, particularly through the potential of Rail Freight Corridors.

Monika Heiming, EIM’s Executive Director, said: ‘’EIM and its members have proactively engaged themselves into the development of Rail Freight Corridors and their improvement in terms of quality, interoperability and capacity. We commit to continue doing so in order to help rail freight to become more customer-oriented, closer to market’s needs and – finally – reach its maximum potential.”

RailNetEurope (RNE) hosted a discussion on its joint project with Forum Train Europe, Redesign of the International Timetabling Process – TTR. After a presentation by TTR project manager Phillipp Koisier, a high-profile panel of industry experts took part in a Q&A session on further developments and the challenges faced by European timetabling at freight level. Participants included Michael Stahlhut of SBB Cargo International, Peter Graham of Freightliner and Michael Beck of DB Netz. The general consensus was that TTR will be a vital project in boosting the freight sector’s competiveness against other transport modes, but that it had to start soon.

The next EU Rail Freight Day has been scheduled for Thursday December 7, 2017.