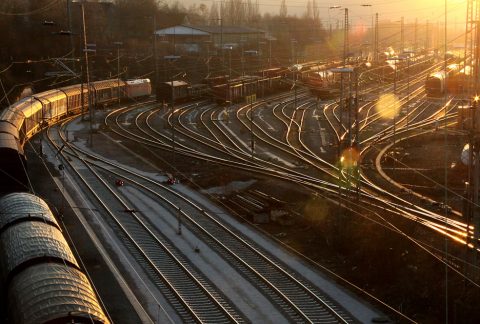 Freight in the spotlight at RailTech 2017

One of Europe’s premier events promoting rail technology, the three-day conference and exhibition in the city of Utrecht has featured many presentations relevant to the freight arena. The Rail Cargo Innovation award meanwhile was presented to Move Intermodal as part of RailTech Europe’s annual ceremony marking excellence in the rail sector.

Rail Freight Day is designed to be an opportunity for stakeholders across the freight to meet, exchange ideas and hear about industry innovations. Nine workshops are scheduled to take place, several of which will be in English and the rest in Dutch.

The English ones are: Innovations in the rail freight industry 2017, by Dutch rail infrastructure manager ProRail and the harbours of Rotterdam and Amsterdam; Research into the role of rail freight in Belgium as part of the intermodal freight chain (Frank Troch, University of Antwerp; Smart Rail – supply chain-oriented rail freight services (Joris Tenhagen, Seacon Logistics); The potential of trams for urban freight distribution (Katrien de Langhe, University of Antwerp)

The conference themes have been the European Railway Traffic Management System (ERTMS); Digitalisation in Railways; and today’s final sessions, Maintenance of Rail Infraststructure. RailTech Europe 2017 is hosted by the Dutch rail infrastructure manager ProRail, and organised in cooperation with ProMedia Publishing, the International Union of Railways (UIC) and Dutch Railways (NS).

Speakers have included Ulrich Roth of Swiss Federal Railways (SBB) who focused on ETCS Level Two in Swiitzerland, in particular the Gotthard Tunnel; Anna Nicodemi of Swedish transport manager Trafikverket, who looked at RFID, and Tiberiu Buzas of Railwatch, who shared some of their work into the digitalisation of rail freight wagons.

Reports of days one and two are now available on the Railtech Europe website.