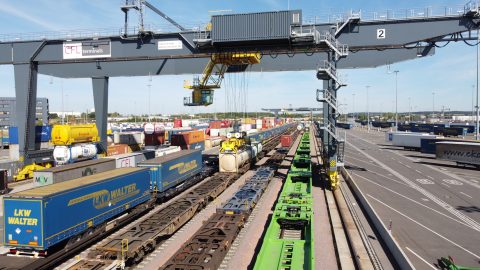 Published on 15-07-2022 at 10:20
Launch of an intermodal rail connection between Bettembourg-Dudelange and Rostock

The Rostock Port continues to experience positive developments in combined transport (CT) this year. In the first half of 2022, more than 64,000 intermodal loading units were handled, marking a 4 per cent increase compared to 2021.

“The increase is mainly due to increases in frequency to Bratislava and Dresden. In addition, a connection with Wuppertal that operated between 2018 and 2021 was resumed”, says Dr. Gernot Tesch, managing director of Rostock Port.

Let’s look at the numbers

Currently, the German port can count on 47 combi trains running weekly to and from various locations in Europe. 19 in Italy (16 in Verona and 3 in Bologna), 6 in Bratislava in Slovakia, 19 in Germany with two connections in Curtici, Romania, (10 in Dresden, 5 in Herne, 3 in Wuppertal, and 1 in Halle), and 3 in Bettembourg in Luxembourg.

The recent expansion of the Bettembourg connection, carried out by Luxembourg railway company CFL Multimodal and ferry operator Stena Line, included two antennas to Lyon in France and to Barcelona in Spain. This expansion allows craneable and non-craneable loading units to reach Spain from Sweden or Norway in four days in combined transport.

The total capacity of the Rostock terminal is 130,000 units per year. 64,000 units handled in the first half of 2022 seems to show that the port will reach full capacity by the end of the year. The continuous growth of the Rostock port is proving the success of combined transport, with increased volumes and a lower environmental impact.

For Hemisphere, rail ferries, by nature, provide mechanised, safe, quick loading/unloading, as it seems the optimal at SS transports…
This, an existing technique, now should be taken benefit of, by new “Mafi” rail bound, port to port trains?…
(Regrettably, in absence of the requested, the Shift to a timely, high capacity, high utilisation railway, as for time being, the on road transports, for majority, remains, the single alt., up to 1000 km from port…)