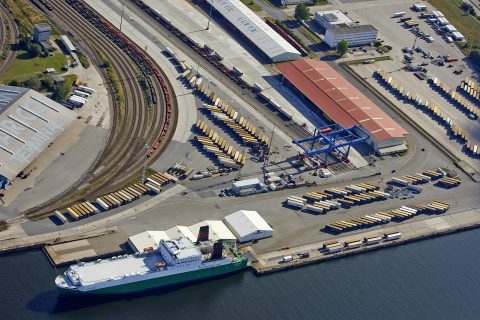 The Rostock trimodal terminal reached a record-breaking number of handled units thanks to rail freight. For the first time in its history, this year, it handled 100,000 units. The number was reached by the end of October, leaving space for more volumes to come until the end of 2021.

The modal shift is a critical component of the terminal’s success. The “more trucks on rail” trend is becoming increasingly important and works perfectly for the terminal, say its representatives. However, Rostock was expecting such growth. That is why some months ago, the terminal invested in an extra 740 metres of rail tracks that would enable it to receive more and longer trains.

Rostock trimodal terminal is a subsidiary of Euroports Germany. It’s a joint venture of Euroports and Kombiverkehr, with multiple rail connections within Germany and Italy, the Czech Republic, Romania, Slovakia, and Luxemburg. Additionally, it offers RoRo and ferry connections to and from Scandinavia.

The terminal’s total capacity is 130,000 units per year. With the first record already in place, Rostock trimodal is very close to reaching its full capacity. Would that happen in the course of the coming year? And will it result in more rail expansion?

Rostock’s success is a case proving that combined transport can become the transport segment of the future. Apart from increasing volumes and improving business, it also plays a crucial role in the green transition of companies. “Just during 2020, combined transport in the trimodal terminal saved approximately 115,000 tonnes of CO2,” explained Euroports Germany.