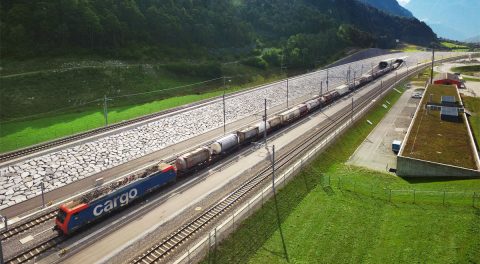 Switzerland aims to extend its infrastructure investments in France and Italy, targeting rail lines and terminals. In France, it is working with the government to define the size and type of investment on the Wörth-Strasbourg line. As for Italy, the Swiss look at co-financing the extension of the Lötschberg-Simplon line and the construction of the new Milano Smistamento terminal.

“It is our constitutional obligation to enable the modal shift even outside Switzerland if this means that our country also benefits”, commented Peter Füglistaler, director of land transport at the Swiss Federal Office of Transport. In this way, he tried to explain why Switzerland decides to invest in the infrastructure of other countries.

Switzerland might not have reached the goal of a maximum of 650,000 truck movements in 2021 (the number of transalpine truck journeys was 860,000); however, this supposed failure provides space for more plans and investments to reach the needed rail freight modal split. “As long as we don’t reach our goal, we need to do more, including rail investments in other countries. We have the legal basis for that”, emphasised Füglistaler.

The financing of the Wörth-Strasbourg line to meet international standards and work as a bypass to the Rhine’s right bank line is not confirmed yet. Nevertheless, this is not disappointing since the French and Swiss governments are in close consultation. “We are talking with French colleagues to see how Switzerland can be involved in this investment and what should be the project’s focal points. We hope that we will sign the agreement by the end of the year and implement the project in a ten-year timeframe”, pointed out Füglistaler.

He also underlined that this French bypass will not only become an alternative to the heavily used and frequently disrupted Rhine’s right bank line, but it will also be of utmost importance for traffic coming from Belgium and the port of Antwerp. As a result, it will not be just a bypass but also a permanent solution.

In Italy, the Swiss government works closely with the state-owned Ferrovie Dello Stato Italiane. Italians plan to extend the Lötschberg-Simplon line crossing the Swiss-Italian border towards Milan and facilitate access to Novara, Domodossola and Milan. Switzerland had already signed in the past a contract with Italy worth roughly 142 million euros and will thus contribute financially to the line’s extension but not cover the total cost. This project is set to finish in 2028.

Speaking of facilitating transalpine traffic and access to and from Italy, Switzerland’s co-financing of Hupac’s new Milano Smistamento terminal serves the same purpose as any other international investment. “Switzerland also strives to finance terminals if they have a great contribution to intermodal traffic through the country”, explained Füglistaler.

“Hupac’s Smistamento terminal will be a great addition to the company’s Busto Arsizio terminal. Its added value is that Busto Arsizio serves mainly the Northwest axis, while Smistamento will serve the Southeastern axis”, said Füglistaler. Apart from removing more trucks from the road, the Smistamento terminal will contribute to the complete transformation of the broader Milan area into a fully integrated intermodal logistics hub that will reach out to all directions. On top of that, since it will serve different regions than Busto Arsizio, it could help mobilise the whole Italian rail freight and intermodal sector.

However currently “international standard”, no longer is sufficient.
All global devices, by air and by sea upgrade, for lower costs. The “last mile” device upgrades, for meeting with demands of ware owners, that call for “On Time” deliveries, etc. (For majority now the on road trucks is the single available high quality alternative, up to 1000 km from port.)
32,5 ton safely sustainable axial load, etc. now should be min., etc. Noise, Symptom of low track quality, no longer is acceptable, etc.

PKSG WORK PROFILE https://www.linkedin.com/in/pradeep-kr-singh-g-81427b31 is from India. Where skywalks require public & material transport across a population of 1300 million living in 650 districts of India. It enjoys today’s global tourism, Divine & Health visits that existed with 5000 years old civilization. Today under leadership of PM MODI the Non Residents Indians will boost the work viability with Investment. How about a good exchange of work & resources?