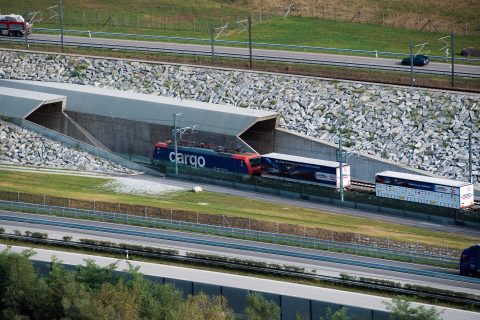 Next year will be the starting point for the use of longer trains in Hupac’s transalpine routes. A standard train length of 690 metres via Luino in Italy and 625 metres via Chiasso in Switzerland will be the company’s benchmark for 2022. The development comes in response to the reduction of subsidies by the Swiss government. “Only with the longest and heaviest trains we will be able to absorb the upcoming marked decrease in funding. Εvery metre counts”, said Michail Stahlhut, CEO of Hupac Group.

The use of longer trains between Italy-Switzerland and the whole Rhine-Alpine corridor has been addressed before by the intermodal company. According to Hupac, they are critical in terms of reaching modal shift goals on a European level. The Swiss infrastructure is suitable for using them, and so are the Gotthard and Ceneri base tunnels that were designed to handle 740 metre-long trains.

Nevertheless, the need for cooperation between different countries to make all infrastructure across the Rhine-Alpine route compatible with longer trains is still there. There are still gaps to be filled to allow longer trains to run seamlessly through the corridor. Consequently, Hupac’s initiative is also a good test to check whether such services will face substantial problems.

The ongoing impact of Covid-19 and the growing demand for intermodal traffic led to a 10 per cent increase in Hupac’s traffic in Q1 of 2021. By the end of the year, the company expects a single-digit overall growth in traffic. The main focal points for this year will be the development of Swiss Alpine transit services.

As for its network expansion, the company has already shared interesting objectives concerning new destinations and extra roundtrips in existing ones. Pordenone in North-East Italy will be one of the highlights with its direct connections to Rotterdam. Moreover, Singen in Germany will also attract much attention with its new links to Munich. At the same time, Zeebrugge in Belgium will become a hub for traffic between the UK, Italy, Poland and Spain.