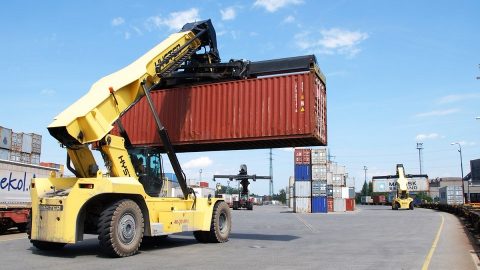 Combined transport scores positive results in Q1 of 2021 despite hurdles

Published on 18-05-2021 at 09:26
Efficient terminal handling is making rail more competitive and stimulating growth all over Europe, such as here in Paskov, Czechia

The combined transport sector scored a positive performance in Q1 of 2021. Compared to the same period last year, traffic increased by 3,17 per cent. The results came under unprecedented conditions, involving Covid-19 restrictions and significant disturbances. However, the slow recovery of passenger trains contributed to the sector’s growth.

The International Union for Road-Rail Combined Transport (UIIR) foresees a positive future for the combined transport (CT) sector. Hurdles did not bend it, and it performed better than Q1 of 2020, which was free of any Corona-related obstacles. This might be the result of an overall shift to intermodal transportation and the benefits that it offers. However, it’s most likely due to the freed capacities from shortened passenger services which were much more impacted by Covid-19.

Reduced passenger trains provided increased capacities since the pandemic’s beginning. Nevertheless, combined transport had to face other challenging situations hindering its operations. The first strike arrived in late January when Denmark banned the transportation of pocket wagons on semi-trailers, following a safety incident on the Great Belt Bridge. The ban was supposed to last for 14 days until the investigations’ conclusion. However, it was dragged until the end of April, causing immense financial losses to companies and forcing them to look for less efficient alternatives. Currently, intermodal traffic through Germany has resumed under strict conditions.

Later, in mid-March, another disturbance took place in the heart of the European railways. On 15 March, a landslide in the Middle Rhine Valley near Kestert started disturbing traffic in one of Europe’s main rail freight corridors, the Rhine-Alpine. Trains could not use this route anymore at the same pace as before and sometimes at all. DB Netz, the infrastructure manager, did not provide sufficient solutions while companies complained about poor communication over the problem. Traffic in the corridor restored partially starting on 2 May, when trains began using the one side of the tracks. Works to restore transportation through the route entirely are still ongoing.

Last but not least came the Ever Given incident and the closure of the Suez canal. The container ship got stuck in the canal in late March and blocked 400 vessels from reaching their ports. “The resulting disturbance in port activities adversely affects CT trains extensively in port hinterland relations to this day”, according to the UIRR. These instances of traffic distortion are proof that CT did not only benefit from reduced passenger traffic but also fought its way to growth through challenging conditions.

Undoubtedly, this is a positive message for the near future, where the CT sector also expects several regulatory and policy-related developments. Among them is the Eurovignette Directive on road tolling, the TEN-T Regulation revision, and legislations to facilitate the implementation of the European Green Deal. CT is to benefit substantially from these developments and probably grow more.

On 21 May 2021, RailFreight.com and UIRR are organising a dedicated online event on charging for access to state-owned transport infrastructure. The aim is to bring together all stakeholders involved in the freight transport industry and accelerate the discussion focused on rail and road access charging.

Are you interested in joining? Then you can check the event’s programme here and register here.