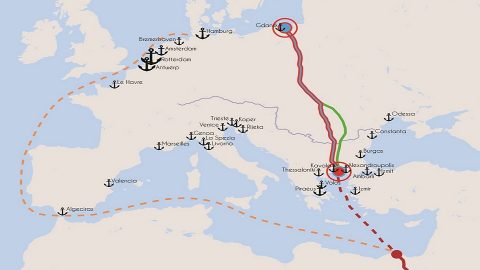 Will the Aegean – Baltic corridor become part of the TEN-T network?

“We made a proposal to the European Union to establish a new TEN-T corridor”, Rumen Markov, owner and general manager of Large Infrastructure Projects said at the RailFreight Summit in Poznan. He presented the concept of the new Aegean – Baltic corridor. “We officially submitted this proposal. Now it is under scrutiny.”

By 2030 the European Union will launch the new Core Network of the Trans-European Transport (TEN-T) corridors. It will include nine transport arteries. Large Infrastructure Projects advocates for extending this network with the new Aegean – Baltic corridor. The company is focused on developing pan-European projects and hence developed the new transport artery between Aegean and Baltic seas. The new initiative was named the ABC+De corridor, which is an acronym from the Aegean Sea – Baltic Sea Connection and the Danube River.

The new corridor was developed as a shorter way for freight running from Asia or Eastern Africa via the Suez Canal to Northern Europe. Now, the vessels sailing from the mentioned parts of the world make a big detour: first, they go through Mediterranian Sea, circumnavigate the Iberian peninsula and then head northward.

“We developed this corridor as one of the main routes between Europe, Asia and Africa. Its main goal is to provide a shorter way for the goods from the Suez Canal to a new port on the Aegean Sea and then by a new railway connection from Greece via Bulgaria, Romania, Hungary, Slovakia, Poland to a new port on the Baltic Sea”,  Markov noted.

Within the proposed corridor, the Bulgarian company developed several sub-projects. There will be the brand new seaports on both ends of the transport artery: Ismara port in Greece and Vistula port in Poland. According to the Large Infrastructure Projects vision, Ismara port will be located in Western Thrace, between the existing harbours of Alexandroupoli and Kavala. Vistula port will be placed near the delta of a river of the same name and in a few kilometres eastward from Gdańsk.

Both termini will be connected by the Danube – Aegean Sea’ Motorway, which is partially based on the Polish project of the Via Carpathia highway, and the South – North – Stream (SNS) railway. In addition, there should be established a series of multimodal centres on the route.