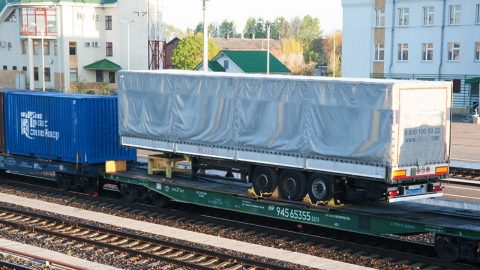 The fact that Kaliningrad Region is cut off from mainland Russia is not an obstacle for the logistics companies. The semi-exclave has a well-developed network of container trains and multimodal connections. Now it is the turn of the piggyback services

While European companies are busy setting up Ro-La trains to the Baltic states, Russia is trying to keep pace with this trend. After several years of testing and evaluating, several Russian companies have implemented a joint project of a combined train service that includes flat wagons loaded with both containers and semi-trailers. It provides a freight delivery from Moscow to Kaliningrad via Belarus and Lithuania or backwards just in approximately two days. This is two times faster than a conventional lorry travelling by road.

The first piggyback connection from Moscow to Kaliningrad was tested by Russian Railways (RZD) in February 2018. During the trial shipment, the delivery was provided in three days. Afterwards, RZD has succeeded to improve the rail freight service, reduce its travel time up to two days and adjust the joint tariff. The mentioned delivery is considered to be the first regular piggyback connection on the way to the semi-exclave region.

This time, RZD, represented by its regional division Kaliningrad Railway joined forces with several partners including TransContainer (a subsidiary of Delo Group), TD Ecopolimery, Stroikeramika, Lazurit Cargo and Belarusian Railway. The first regular shipment departed from Kaliningrad on 7 May, while the delivery in the opposite direction was launched in two weeks, on 20 May. In both cases, the delivery was performed in time without any delays on the borders or elsewhere.

It is worth to add that the new service is the second piggyback connection for RZD. At the end of 2018, it launched a Ro-La train between Moscow and Novosibirsk. However, there is an opportunity for the piggyback service towards the EU. In 2007 Russia and Germany negotiated the possibility of Ro-La trains on the way between Mamonovo, a railway station close to the Polish border, and Soltau, an important place around 90 kilometres from two German key ports – Hamburg and Bremen.

The Mamonovo station has direct access to the Polish network via the standard gauge track (1,435 millimetres). Moreover, there is a combined track with two gauges (1,435 and 1,520 millimetres) up to Kaliningrad. In the early 2000s, it was used for the Kaliningrad – Berlin passenger train. Why not adapt it for the freight trains loaded with semi-trailers?