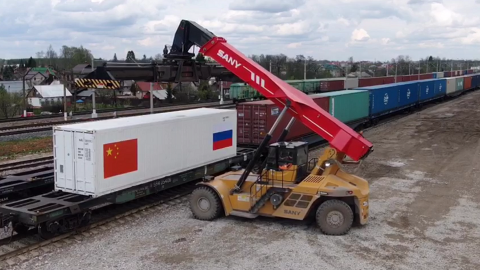 First shipment of frozen poultry on rail from Russia to China

A new type of freight is running from Russia to China by rail. The first batch of frozen poultry has been shipped from the Selyatino terminal in the Moscow Region to the Chinese city of Chongqing. Chengdu will be the next destination for Russian agricultural products.

The pilot shipment of 24 tonnes of frozen poultry departed from Selyatino on Friday, 8 May. It was arranged by the Resource Group, one of the largest manufacturers in Russia, RZD Logistics, the dedicated subsidiary of Russian Railways, the Russian Export Center (REC), a state-owned institution for promoting non-commodity export, and Slavtrans-Service that operates a cold terminal at Selyatino station. The expected delivery time is 15-16 days.

On its way to Chongqing, the single refrigerated container will go through Kazakhstan and will be transhipped at the intermodal terminal in Khorgos. “During the journey, we will daily monitor the condition of the freight, temperature regime, speed at the border crossings, the timing of control veterinary procedures”, said Alevtina Kirillova, the project manager for the development of export logistics at the Resource Group.

All the partners engaged in organising the mentioned shipment are interested to make the Selyatino – Chongqing connection regular for delivering food products. The Resource Group as a key poultry exporter in Russia plans to increase its presence in the Chinese market. To this end, the company plans a new train from Russia to China that will run directly between the countries via Zabaikalsk. It will start at the Selyatino terminal but its final destination will be another. The Resource Group is interested in delivering poultry to the city of Chengdu.

As for RZD Logistics, it has been developing its Agroexpress services, a series of container trains dedicated to agricultural goods, since September 2019. “We understand that the export of domestic agricultural products to China is one of the most promising areas for foreign trade relations with China. I am convinced that in the future we will send for export full compound cold trains with Russian meat and poultry”, said Dmitry Murev, CEO of RZD Logistics. At the same time, Slavtrans-Service as an operator of the cold terminal will also benefit from the new trains.

How is the container aggregate powered?
Somebody know.