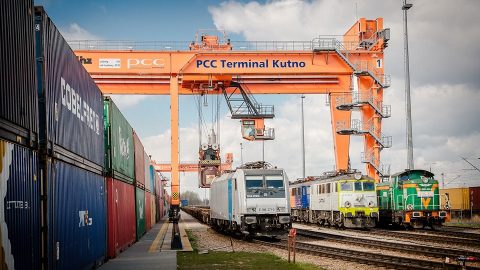 A year ago, he was the most optimistic man in his corner of the world, but today, he is struggling with dropping volumes, congested terminals and a looming economic crisis. Dariusz Stefanski, CEO of the Polish operator PCC Intermodal, explains how the ongoing corona crisis is impacting the intermodal business, in Poland and beyond.

It is only a month ago when the Polish Office of Rail Transport released the impressive figures of 2019. Despite a reduction of bulk volumes, intermodal transportation on the Polish railway network was growing. The same trend was seen in the year before. This year will clearly conclude with different figures, Stefanski expects.

“Intermodal traffic has been unstable”, he carefully describes. Domestically, a drop of more than 10 per cent could be seen. Export is slowly picking up, after a period of disruptions in the supply chain to the Far East. However, import from the east is now facing a challenge, he explains.

“This is due to the closure of many local factories. Cargo arrives in Poland, but lies idle in the ports because there is no-one to pick it up. Transport options are there, but the receiving companies have closed their doors.” According to the CEO, this concerns car factories, but also tire manufacturers, chemical factories and others.

He adds that these are factors that could change any time. For example, there is a chance that the rules in Poland are relaxed by the end of this week, which could stimulate the traffic flow once again. “But it is hard to say when and how the current situation develops.”

In general, rail freight is considered to be the modality least affected by the corona crisis. Long-distance train journeys can be carried with relatively little human interaction and is therefore considered safe. There is even a shift to rail, as the maritime and road sectors are facing harsher challenges.

“We have seen a lot of new customers who would previously never want to ship goods in a 45ft container. Yet, now they opt for intermodal. These are mostly truckers that faced increased rates and border controls. I think we have seen a 20-25 per cent shift to rail from this sector.”

The shift from road to rail is a positive element on the current crisis, one that operators could profit from on the long term. But this is not a given, Stefanski explains. “The question remains whether these shippers will stay on rails, and whether they survive the crisis at all. We have concluded some long-term contracts with certain customers, but only for part of their volumes. They have not shifted to rail completely.”

The slight shift to rail does also not mean an increase in volumes. Maybe less so than other modalities, but also rail is facing a drop in volumes. “We started a new service in February, connecting the Belgian cities of Antwerp and Genk with various regions in Poland. The service has been up and running for two months, but with an occupancy rate below 60 per cent. It will take a few weeks to see if this can become a stable intermodal service.”

Similarly, the multimodal connection from Japan and South Korea to various destinations in Europe, is not breaking records. “It was picking up at the beginning of this year and the service is not bad, but the volumes are mostly moving westwards. There is still very little eastbound traffic, resulting in a lot of empty containers in Europe. I yet have to see the projected 5 million TEUs on this route.”

The intermodal sector could use some support in Poland, Stefanski argues. It is a market with very low margins. “Only with high cargo volumes you make a little bit of money.” But here he touches a topic that has not gone undiscussed in the country. Even before the crisis, the intermodal market has pled for a more active approach from the government in providing more favourable conditions.

“Unfortunately, there is no intermodal department in our government. There is a rail transport department, but no focus on intermodal. Nobody believed it would play a role in the railway industry.” According to the CEO, this only stems from the fact that Poland has one of the most expensive track access charges. “We pay 4 Euro per kilometre, whereas in Germany you pay 1.50 Euros.”

Added to this is the frustration about the average trains speed on the network, he continues. In Poland, that is 30kmph, compared to 60kmph in Germany. It would make sense if we pay less in a country where the trains take longer to arrive at their destination. It would save us costs in labour if we could travel with 80kmph, for example. Now we have to switch drivers halfway the country if we move from the Baltic coast to the south.”

On 1, 2 and 3 September the RailFreight Summit Poland takes place, this time in Poznan. The shift to rail and requirements to facilitate this will be discussed by various expert speakers. Are you interested in this event? Visit the website, or register here.