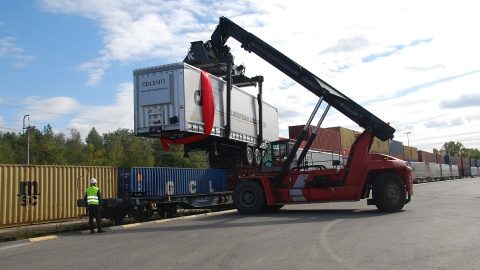 Poland moving from coal to containers

The Polish economy is reducing the consumption of coal. This has a direct impact on the country’s rail freight sector. As a result, the carriers are being refocused to the transportation of the containers. This shift leads them to invest in new rolling stock and innovations.

“We are seeing that the Polish economy is moving away from the coal, and this good in terms of reducing emissions. At the same time, we are seeing that intermodal transportation is growing double-digit and the economy is being containerised. Of course, it has an impact on our work”, CEO of PKP Cargo Czesław Warsewicz said at the conference ‘Railway on energy’ (‘Kolej na energie’ in Polish) that took place in Warsaw last week.

At the same time, the statistical data shows the growth of the intermodal volumes on the country’s railway network. The container traffic on the Polish railways was 430,000 TEU or 3.3 million tonnes in 2009. By 2018, this volume set a record level of around 1.9 million TEU or 17 million tonnes. The share of intermodal transportation also grew from around 1.4 per cent in 2009 to 6.8 per cent in 2018.

The shift to intermodal transportation also requires PKP Cargo to pay more attention to innovations. “We are working on the improvement of our cost-efficiency in order to offer our customers a better price for transportation”, Czesław Warsewicz noted. Among the innovations, PKP Cargo is considering to implement are the hydrogen-powered locomotive and the automated locomotive.

Two years ago the company declared two initiatives in this regard. In June 2018 PKP Cargo joined forces with Jastrzębska Spółka Węglowa (Jastrzębie Coal Company, JSW) for developing the hydrogen-powered locomotive. As for the automated vehicle, this project is being performed together with Pesa Bydgoszcz and Poland’s Institute of Rail Vehicles Tabor (IPS Tabor).

Also, PKP Cargo wants to become more energy efficient. That’s why the company is installing the energy meters on its locomotives. “We want to install the energy meters on all our locomotives”, the company’s CEO specified to RailFreight. It is worth to note that the Polish rail sector plans to reduce energy consumption by 1.2 terawatt-hours in the following 10 years, and the energy measuring is one of the important tools in achieving the goal.