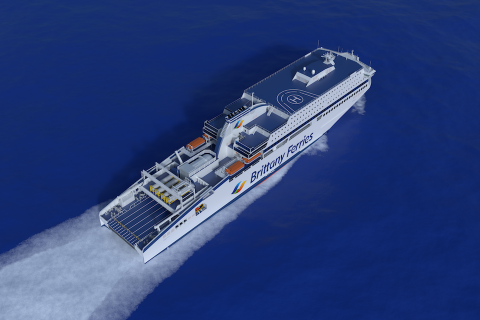 Roll on Rail off: Brittany Ferries sails into freight sector

Brittany Ferries intends to increase cooperation with the rail freight sector. The cross-Channel operator has announced plans for a ‘rail motorway’ from the English Channel port of Cherbourg to Bayonne-Mouguerre on the Atlantic coast, just a few kilometres from the Spanish border. The innovative service will provide an alternative to long-distance road transport, and has implications for UK hauliers too.

Unaccompanied trailers make a lot of commercial sense for ferry operators and hauliers alike. The prospect of carrying more payload at sea, and less down time for drivers and road tractors, all contributes to profitability. Now Brittany Ferries has gone one step further with plans to cooperate with rail.

Greener on land, greener at sea

The service, which would augment the company’s existing sea routes from the English ports of Poole and Portsmouth, has been under feasibility study since 2018. Now the project is moving forward with partners, and the aim is to launch in 2021. The company is promoting this diversification as an opportunity to demonstrate its commitment to a cleaner, greener operation. Brittany Ferries have already announced plans for a new LPG-powered fleet, reducing their dependance on marine diesel.

In a statement, Brittany Ferries say the service will compliment their existing Plymouth – Santander sailings, which connect the south west of England with north west Spain. Hauliers are looking at the service as a way to significantly reduce road miles from the Iberian Peninsula to the UK. Using specialist multimodal equipment at the ports, unaccompanied containers could be transferred rail and ferry all the way from the Spanish border to the English coast, cutting out almost 900km each way by road.

The project is a development of the ‘piggyback system, pioneered by the French-based specialists Lohr. Trailers are loaded on to specially designed pivoting rail carriers at dedicated facilities, for onward forwarding by rail, and ultimately ferry. Lohr already operates an inland service in France. The Strasbourg head-quartered company has plans for a much wider network, including Channel Tunnel services to terminals in the south of England.

Brittany Ferries say their proposed road-rail service will complement their existing UK/Spain ‘Motorway of the Sea’ by supporting a shift from road to rail, for those moving goods between the British Isles and the Iberian Peninsula. “The link represents a natural progression of the cross-Channel service to Cherbourg from both the UK and Ireland”, says a statement. “It will support the growth of activity around Cherbourg and Bayonne and is designed to transport a wide range of trailers, including those loaded by cranes and ‘swap body’ types”.

The project anticipates regulatory challenges in the area of transport-related emissions, particularly in relation to maritime transport. The ferry operator says further benefits will include reduced congestion, accidents and wear and tear on road infrastructure. French rail operator SNCF has been in talks with Brittany Ferries over the approved rail routes for the service.

Cherbourg was chosen as the receiving port due to the availability of shore-side rail infrastructure. At the southern end of the route, the Bayonne-Mouguerre European Freight Centre is designed to handle intermodal flows bound for the Spanish Pyrenees border, and can meet the needs of the project. 750-metre-long trains can be accommodated. It should be a case of ‘all aboard’ for a first sailing in 2021.