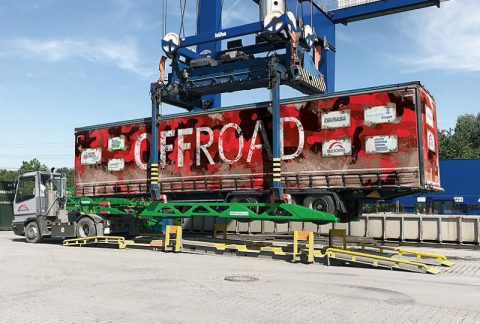 Non-cranable trailers in Hungary can hit the rail

A system that enables the lifting of non-cranable trailers on a train has now been employed in Hungary by TX Logistik. The first shipment for a Hungarian customer took place on the route between Herne and Budapest, the operator announced.

The NiKRASA system uses a positioning aid and a loading adapter to load the trailers, which are otherwise bound to the truck, onto a train. TX Logistik operators around 150 NiKRASA adapters on various routes throughout Europe, but this is a first in Hungary. “There has always been high-volume traffic between Hungary and Germany. However, only a very small number of craneable semi-trailers has been available for rail transport in Hungary,” explains Bernd Weisweiler, director of business development, Innovation and Funding at TX Logistik.

The trailer that went onto rail is from International-Alexander. It has been successfully loaded at the Budapest rail terminal Mahart Container Center for transport to Germany. “Especially on our connection between Herne and Budapest, which we currently operate with five round trips per week, we can see good opportunities for further NiKRASA customers,” says Weisweiler.

“With the Herne – Budapest connection, customers can now use the NiKRASA system on a total of ten routes,” adds Christoph Dörre, Manager for NiKRASA and Business Development, Innovation and Funding at TX Logistik. “In the future, we are planning to consolidate this network with additional lines and thus support the development of the European TXL and Mercitalia network at the same time.”

Trailers are traditionally transported by road, which is considered to be a great miss for the railways. The share of cranable trailers is small on the market. If the infrastructure allows for these trailers to be loaded onto trains, a major shift to rail is foreseen. There have been several initiatives to get non-cranable trailers on rails, but the systems that are operational reach a very small market.

Recently, several initiatives have been reported. In the Netherlands, a new terminal is in the making, which should be the first step towards a network of terminals enabling the transshipment. The first destination was Berlin, but the project is facing financial challenges. In the meantime, the CLIP terminal in the Polish Swarzędz has been equipped with the Lohr Railway System technology, allowing to load non-craneable trailers on the trains. The same will be possible at the new rail-road terminal near Calais, a project funded by the EU.