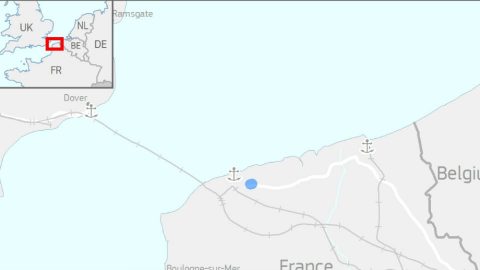 The European Union has granted a fund of just over 7 million Euros for the construction of a new rail-road terminal in the vicinity of Calais, the most important logistics hub between the United Kingdom and Europe. The facility is to transship thousands of non-cranable semi-trailers from lorries onto rails with a dedicated technology.

The project is carried out by CargoBeamer group and Calais Promotion. Cargobeamer has developed an innovative system for the automated transfer of freight trailers to and from rail carriages. Accordingly, this technology “will quietly and automatically load and unload up to 900 semi-trailers of all types, every single day, onto rail cars.

Calais is the major transit hub between continental Europe and the UK. Located on the North Sea-Mediterranean Core Network Corridor, the Port of Calais channels roughly half of all trade between mainland Europe and the UK, with traffic expected to double by 2021 compared to 2019 values.

With the new facility, the semi-trailers will arrive at Calais by rail from major industrial and logistics centres on the European mainland. “It will permanently lighten the load on the road network and the environment throughout Europe”, Cargobeamer expects.

The technology offers new opportunities in transshipment markets. Non-cranable trailers have up till this point been the type of unit that could not be transported by rail. The system allows for smoother operations in multimodal terminals and for a significant shift to rail.

“The innovative technology rolled out in this action will support the modal shift from road to rail and will improve the environmental performance of the transport sector, reduce congestion in and around Calais itself and improve the efficiency and safety of transport”, the European Commission wrote. It also expects the creation of the new rail-road terminal to improve freight traffic flows beyond the city itself and into France, the UK and the rest of Europe.

The terminal is expected to be delivered by 2022 and the project is already ongoing. The total costs of the project are more than 31 million Euros. The EU contribution covers 22 per cent of these costs.