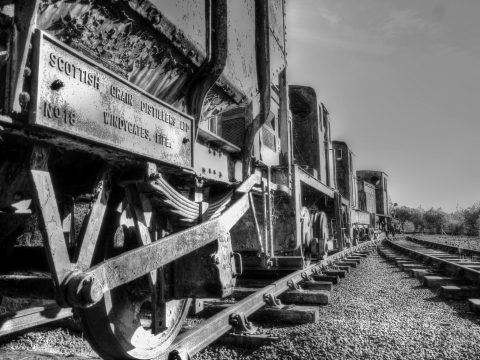 Rail freight rarely says no. Whatever the customer wants to move, there’s a train that can take it. Take arguably Scotland’s most famous export for example – whisky. In this special column for RailFreight.com, self-confessed fan of the malt and, by day, international supply chain and freight logistics consultant Joost Riemslag of CubeLogics offers a cautionary tale of how one booming 19th century rail freight industry became a victim of its own success. Crucially, he also asks what lessons it offers to those committed to making a success of the new Europe-Asia rail corridor.

Some 150 years ago, the Great North of Scotland Railway (GNSR) reached its peak. From Aberdeen to Inverness, 462 kilometres of rail were connecting harbours, farms, cities and whisky distilleries. The gradual deployment of the railway over the previous 23 years, which began in 1846 with permission given to build both the Morayshire Railway from Lossiemouth to Craigellachie, and the Deeside Railway, resulted in the amalgamation of various smaller lines into the GNSR. The main driver for this? The movement of freight by rail, naturally.

The moving of passengers, not to mention workers and labourers, was quickly becoming of equal importance. Using rail to unlock the potential of northern Scotland made it possible for several industries to grow their businesses. Labour and materials could be moved far faster and more efficiently than just a few decades earlier. One could even argue that the world may not have been as familiar with most of the Highland whiskies as it is today, had this railway had not been able to contribute to the growth of the distilleries and the spread of whisky as an export product.

Thus, railway has brought fame and success to a remote area of Europe – the north of Scotland. Once difficult to reach by horse or car, this area has been opened up by rail and is today accessible by all modern means of transportation. With no fewer than 17 airports, Scotland has never been better connected to Europe and the rest of the world. The GNSR, however, became a victim of its own success. But why?

The opening up those early transport routes resulted, naturally, in the growth of the region. Additional and alternative means of transportation were introduced to open up the area for people and, crucially, goods. This put huge pressure on the railway in terms of costs. Since rail freight was not the cheapest means of transportation for both people and goods, it was not long before competition from road freight arrived and gained the upper hand. This was also stimulated by the building of new and modern roads connecting the south with the north. Ultimately this resulted in today’s situation whereby the majority of Scotland’s railway network in Scotland is propped up by foundations and non-profit organisations. Tourists and railway fanatics are bypassing the nostalgic train stations of the GNSR, on their way to fly-fishing courses, hiking events and – naturally – whisky ‘nosing’ sessions.

So why am I telling you this story? Because today we are seeing a revolution in the rail freight market, with new overland connections between Europe and the Far East. Several large companies have already invested in years of research and testing in order to start using rail as the gateway into Europe. Why? Because two or three weeks of product transit time versus five to six weeks by ocean is a most compelling reason for industries operating modern supply chains to start looking at switching to this new mode of transportation.

It cuts so-called ‘sleeping capital’ – or inventory sitting idle on the water – by around 50 per cent. It also removes a huge chunk of the risk on obsolete inventory. Both of these are very good financial reasons to start moving over to rail freight for all imports out of the Far East.

The options here are threefold: The Eastern Route, the Southern Route and the Northern Route.  Crucially, all container transports are accompanied by Common Consignment Notes (CIM/SMGS) which simplifies and speeds up the the border crossing process. This is, of course, very different to the old Scottish GNSR arrangements, where no such border crossings were involved. Today’s main challenges of the East-West rail connection are centred largely on these customs formalities. Close co-operation between all of the countries on the supply route however can ensure these formalities are less of a bureaucratic exercise than they need be.

However, the roughness of the terrain and the number of borders will be the largest hurdle for the highways to take over the success of the railway – like what happened, sadly, in Scotland. This is therefore the most probable motivation for the Far East rail connection to stay in business.

Expansion, modernisation – such as the shift from diesel to electric – and increasing occupancy rates will need to become the future strategy of this new East-West corridor. Once this is being deployed properly, the connection will be here to stay and most likely become the preferred route to Europe for intensive capital trade. Security will therefore also be a topic of focus for operators. But that’s for another day.

Where the Great North of Scotland Railway quickly – at least in railway terms – become only of importance to tourists and train enthusiasts, the West-East connection looks like it is going to be with us for some time to come. And there is some irony here. Just this week the UK-China return leg of the first freight train to link the two countries departed London on its three-week, 12,000 km journey. Can you guess what was part of the cargo? That’s right, whisky. The best of British, destined for the consumers of the Far East.

We all now need to consider, with some political care, how we place all of our ‘transportation eggs’ into this single Russian basket – given that it is the rail corridor which passes through several former Soviet states en route to Europe and back again. Much like the care we need to have with the oil pipelines that are being built on Russian soil and which may potentially provide Moscow with an increasing influence over Europe.

But…Japan and China are also currently producing excellent single malt whiskies as well, so let’s first open up this route for some new ‘nosing’.