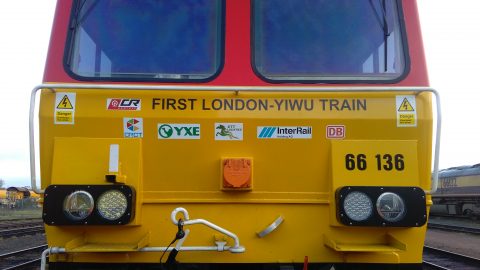 The return leg of the inaugural China-London rail freight service could symbolise the start of a new post-Brexit trading era for the United Kingdom. Laden with products ranging from whisky to vitamins, and pharmaceuticals to baby products, the DB Cargo locomotive-led train has begun its mammoth 12,000km journey.

Due to arrive in three weeks in the consumer hub city of Yiwu in China’s eastern Zhe Jiang province, it departed DP World London Gateway’s state-of-the-art terminal in Essex watched by host of UK and Chinese dignitaries.

One Belt One Road

They watched as the last three containers were loaded onto the wagons before the train’s departure. The return leg comes just under three months after the first ever China-UK train arrived in London. The service is part of China’s One Belt, One Road programme, which is reviving the ancient Silk Road trading routes to the West.

After passing through the Channel Tunnel into France and Belgium, the DB Cargo locomotive will call at Duisburg, before Swiss-based InterRail pulls the cargo through Poland, Belarus, Russia and Kazahkstan, where the train crosses into China. Container operator OneTwoThree Logistics is overseeing the transportation and booking of cargo for the UK/China rail freight trains, in conjunction with Yiwu Timex Industrial Investments Co, which is operating the service with China Railway Container.

This first consignment of cargo to go by rail – which is cheaper and less restrictive than air freight and faster than sea freight – comes less than a fortnight after the UK Government triggered Article 50, the start of the formal process of leaving the European Union, and thus placing an emphasis on the UK to secure trade deals with countries all over the world.

Greg Hands, Minister of State in the UK’s Department for International Trade, said: “This new rail link with China is another boost for Global Britain, following the ancient Silk Road trade route to carry British products around the world. It shows the huge global demand for quality UK goods and is a great step for DP World’s London Gateway Port as it also welcomes its first regular container ships from Asia.”

Sultan Ahmed Bin Sulayem, Group Chairman and CEO, DP World said: “We are proud to be playing a key role in facilitating this significant trade occasion between the UK and China. DP World is a leading enabler of global trade, with its network of marine and inland terminals, industrial zones and logistics and ancillary services to ensure nations all over the world can move goods in, out and inland efficiently and reliably.

“DP World London Gateway, one of the UK’s largest logistics hubs is designed and developed to ensure products can be both imported and exported from the UK via ship or train in a faster, safer and more reliable way than ever before. We look forward to enabling and facilitating more trade between the UK, China and the whole world.”

The Moscow-based United Transport and Logistics Company (UTLC) is an allliance of the national railway operators of Russia, Belarus and Kazakhstan which promotes existing and new overland routes between Europe and the Far East. It will provide the train with an unobstructed passage along the entire stretch of 1520mm gauge track in the former Soviet territories between China and Europe.

A key logistical challenge of this immense journey is the break-of-gauge, with both Europe (mostly) and China’s rail network running on the standard 1435mm gauge, so UTLC will facilitate transhipment at Brest on the Belarus-Poland border and Dostyk on the China-Kazakhstan border.

Alexey Grom, President of UTLC, said: “Our target is to convince customers that there is a competitive rail alternative to deep sea route by rail which is fast and safe, and might be interesting for those who want to have an arrival time for the products designated to European or Chinese markets which is three times faster than sea and ten times cheaper than by air.

“Raising new volumes for transportation in U-East service is of special significance for UTLC, because each additional cargo flow in the Europe/China destination is factored into enhancing efficiency of rolling stock utilisation and cost-cutting. Our objective is to foster growth of this indicator and to find new growth points in partnership with European companies.”

Xubin Feng, Chairman, Yiwu Timex Industrial Investment Co., said: “We are proud to be able to offer the first ever UK to China export train. Restoring the ancient Silk Road as a means by which China, North Europe and now the UK can exchange goods is an important and exciting initiative.

“This is the first export train and just the start of a regular direct service between the UK and China. We have great faith in the UK as an export nation and rail provides an excellent alternative for moving large volumes of goods over long distances faster.”

Philippa Edmunds is Manager of Freight on Rail, an alliance comprising the UK’s main rail freight operators and industry bodies, which works to promote modal shift to rail. She described the UK-China service as ‘modern freight rail at its best’.

“Rail is a crucial part of the logistics supply chain and is well placed to offer long distance traffic both internationally and in the UK, as this story shows,” she said. “Long distance rail freight is cheaper and less environmentally damaging than air freight and faster than sea freight. We hope to see more trains of this kind in the future.”