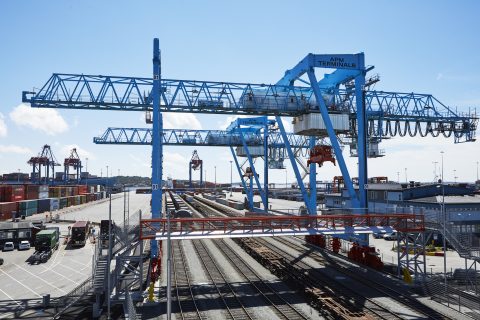 An upgraded rail system forms part of an expanded work package worth 250 million Kronor (around 26 million Euros) at the Port of Gothenburg. The port authority and APM Terminals Gothenburg have agreed to extend an existing work investment programme through to 2024.

APM Terminals took over operations at the terminal in January 2012 with an investment of around 780 million Kronor (81 million Euros). An ambitious upgrade programme for the terminal was set out, including two new ‘Super Post’ cranes, an extended rail system with longer tracks and new rail-mounted cranes.

Gothenburg Port Authority and APM have now agreed that the current crane capacity at the terminal is sufficient, which means a third quayside crane is not required. However, the rail infrastructure improvements remain part of an extended deal which, after first addressing some ongoing union problems, will focus on improved customer service and productivity on both land and water.

Henrik Kristensen, CEO of APM Terminals Gothenburg, said: “APM Terminals is proud to work with Gothenburg Port Authority to stimulate economic growth in Sweden and to increase our bearing on global trade. If we are to create long-term stability for our customers and employees, it is essential that we find a speedy solution to the current dispute at the container terminal.”

The Swedish Dockworkers’ Union recently introduced a ban covering overtime, the recruitment of new employees and the use of contract staff during evenings and weekends. It came into effect on March 13 and is due to continue until midnight on April 30 unless the dispute can be resolved before then. The ban only applies to APM Terminals at Gothenburg.

Magnus Kårestedt, Chief Executive of Gothenburg Port Authority, added: “The agreement means that APM Terminals will continue its powerful investment programme at the port and at the same time they have undertaken to work towards achieving ambitious, long-term volume targets. At present, the focus is exclusively on resolving the trade union problems at the terminal, which is vital if we are to win back the confidence of the market. Once a solution has been reached, the new agreement will offer excellent potential for future growth.”
Tags: APM Terminals Gothenburg, Gothenburg Port Authority, Port of Gothenburg, rail freight
E-mailFacebookTwitterLinkedInWhatsApp