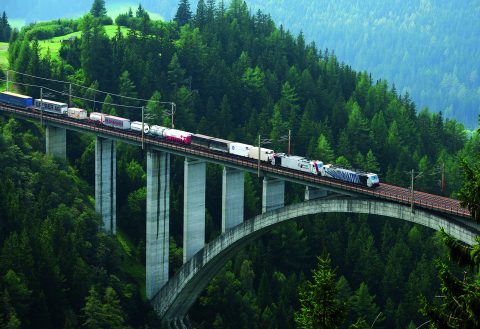 The German-owned intermodal rail specialist Kombiverkehr KG says it shifted 7,329 more truckloads from road to rail in 2016. The total number of consignments was 985,424 (1.97 million TEU), up 0.7 per cent on the previous year.

It was part of an upward trend achieved by the company in both national and international transport, including both the bilateral services between countries and domestic transport to and from the German Baltic Sea ports of Kiel, Lübeck and Rostock, which has connections onto northern Europe.

Robert Breuhahn, Managing Director of Kombiverkehr, said: “Intermodal transport has certainly had to contend with some challenges over the last twelve months, including low diesel costs, international strikes and an extended closure of the nationally and internationally important terminal in Ludwigshafen. It’s nevertheless clear that sustainable growth is still possible in national and international transport.”

Kombiverkehr’s positive performances represent a real boost for the confidence of German freight rail, coming on the back of figures published by the Federal Statistical Office which showed that rail freight volumes nationwide felly by 1.6 per cent to around 361 million tonnes, giving rail a market share of national freight of around 17 per cent, lower than its Swiss and Austrian neighbours.

Fellow managing director Armin Riedl, added: “The harmonisation of EU-wide legislation and existing aid schemes, along with a fair competitive environment for the modes of transport road and rail, would further increase the acceptance of combined freight transport not only among existing users but potential ones as well, and also stimulate the movement of shipments onto the climate-friendly railways.”

Kombiverkehr also announced a new service between the Port of Rostock and Wels in Austria. Starting immediately and initially operating once a week, it leaves Rostock on Mondays, and covers the 930km-long route in around 24 hours. The return service is on Fridays. Services will be increased to two weekly round trips if demand is sufficient. Traction will be provided by DB Cargo AG.

Peter Dannewitz, Sales Manager at Kombiverkehr, said: “The train between Rostock and Wels is a model example of the network strategy pursued by Kombiverkehr. There are many different connection options from Rostock and Wels by both rail and water, which will enable forwarders to deliver intermodal transport on far-ranging transport corridors.”

Already with the biggest national network of rail connections for implementing intermodal transport, Kombiverkehr recently began operating a new international service between Duisburg-Ruhrort Hafen and the Port of Moerdijk in The Netherlands. It has also expanded capacity on services to and from the Baltic ports and Italy.

A new short shuttle service has been launched between Cologne (Köln) and Ludwigshafen to act as a vital feeder service for national and international transport between the gateway terminals. Customers who do business with Turkey can also now connect to the port terminal of Alsancak via ferries from the Port of Trieste, as well as the other ports of Ambarli, Haydarpasa, Pendik, Mersin and Cesme.