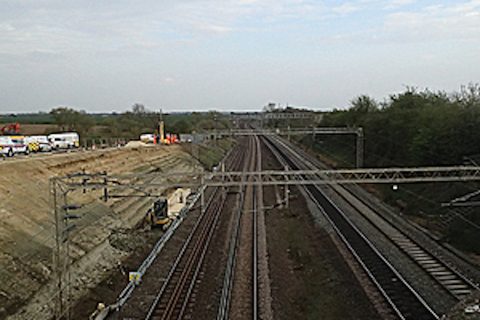 Britain’s Rail Accident Investigation Branch has issued an interim report into a fatality earlier in April, involving a track worker who was struck by a passenger train on Europe’s busiest mixed-use railway.

On the morning of 8 April, a track worker, involved in a civil engineering project on the West Coast Main Line, was struck and killed by a passenger train. The tragedy happened near the village of Roade in Northamptonshire, just north of the modern settlement of Milton Keynes.

“At around 10:52 AM on 8 April 2020, a track worker was struck and fatally injured by a passenger train on the West Coast Main Line near to the village of Roade”, opens a statement from the RAIB. “The track worker was part of a group that were undertaking civil engineering work at the location. At the time of the accident the line was open to traffic”.

The RAIB, which conducts its investigations independently of the railway industry, gave further details of the accident, which disrupted the four-track main line at a point just south of the divergence loop that serves the county town of Northampton.

In a further short statement, the RAIB confirmed the circumstances of the accident. “The train was travelling from Northampton to London Euston, at around 90 mph (145 km/h) when its driver saw the track worker on the line ahead, sounded the train horn and applied the emergency brakes”.

Local media have identified the worker as a man in his fifties, who was employed by AmcoGiffen, an engineering contractor on site. The firm undertake works across the country on behalf of Network Rail. He was working as part of a civil engineering team. Images released by the RAIB show embankment work underway at the site.

The earthworks, upon which the contractors were working, form part of the Roade Cutting, which has historical and scientific significance. The village, after which the cutting is named, is bisected by the main line, but has not been served by a station since 1964.

It is just over fifty years, on the last day of 1969, since a derailment in the cutting caused a collision between a stricken goods service and a passenger train passing at speed. The driver of the latter was killed in the accident.

The current investigation, says the RAIB, will identify the sequence of events that led to the accident and will include consideration of the actions of the those involved, the planning of the work and the implementation of any safe systems of work, any relevant underlying or organisational factors.

Findings and any recommendations to improve safety, say the investigators, will be published on the conclusion of the process, via the established channels – the RAIB website in the first instance.