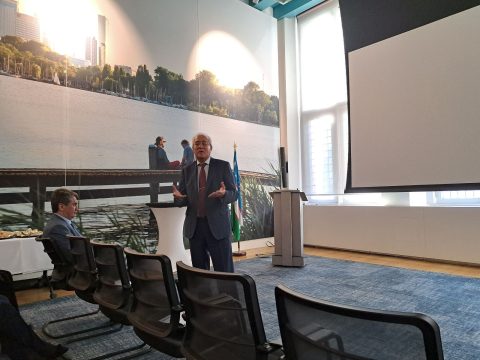 Trans-Afghan rail corridor needs EU as much as Taliban

A delegation of Uzbekistan Railways is on a visit to Europe with a mission: stirring the interest in the Trans-Afghan Corridor. This corridor that connects Uzbekistan with Pakistan via Afghanistan is in need of foreign investment, but the EU has all but jumped onboard, especially since the government change in Afghanistan last year. But what is needed is dialogue, argued the special representative of the President of the Republic of Uzbekistan for Afghanistan to the Netherlands.

Ismatulla Irgashev made this plea at a networking event in the Netherlands on Wednesday 3 November, organised by the Embassy of Uzbekistan to Benelux countries on the occasion of the visit of a delegation of Uzbek Railways. Today, he will speak in Brussels, to ask for more involvement from the EU.

Only a week ago, the Uzbek government announced that it was opening the Trans-Afghan Corridor to Foreign Direct Investors (FDIs) during a meeting held in Tashkent, in eastern Uzbekistan. The meeting was between Uzbekistan’s President Shavkat Mirziyoyev, and Charles Michel, President of the European Council.

Now this project is waiting for investments and future feasibility studies, and mostly importantly, the recognition from the global community. Under the previous Afghan government, the World Bank supported the preparation of the pre-feasibility study for the Trans-Afghan corridor to consider several routes, but this support ceased to exist.

The construction of the project will provide a direct and efficient connection between Uzbekistan and Pakistan, thus the route needs to cross Afghanistan inevitably. The project will require initial investment of 5.96 billion USD, with an estimated five-years construction timeframe. The overall route will span over 573 kilometres, starting from Termez, in southern Uzbekistan, crossing Mazar-e-Sharif, in Afghanistan, and ending in Peshawar in northeastern Pakistan.

The corridor will result in over 5 millions jobs and benefit over 15 millions inhabitants in the region. Moreover, it will provide landlocked Afghanistan and Uzbekistan with access to the seaports in Pakistan, a massive advantage in terms of trade.

According to Irgashev, as the winter is approaching, the majority of the Afghan population is at risk of food insecurity, cold and poverty. The construction of a mega railway infrastructure could help the Afghan population in gaining welfare. Therefore, the project needs to move forward, Irgashev points out.

“Only by criticising the Taliban we will not achieve any result, we need dialogue, we need results.” Irgashev summarised that the corridor could double the regional GDP and bring peace and stability for the inhabitants.

“Uzbekistan has been criticised for its cooperation with the Taliban due to human rights issues in Afghanistan, but unlike the EU, Uzbekistan is in contact with the Taliban. Through this contact they can be connected to the global community”, the diplomat says.

From his observations, there are also gigantic changes within the Taliban in the past 30 years. The contact with the Taliban has gained Tashkent access in the conversation, which is rare in Brussel. Irgashev would like to see Brussels as a participant in this dialogue.

EU, itself, however, at railways need added capacity and added utilisation of existing assets, etc.!
(All other modes, by sea, etc. upgrade for higher loads – and lower costs…)
Current “overhaulings”, restoring, “maintaining”, etc. just is “cementing”, at standards no longer optimal.
Even worse, permanented short comings of railways, now have become excuses, for extras upon majority, clients of the single alternative…
Since long, for Goal of EU…, a New Old Railway is needed!